Everyone makes mistakes. I’ve certainly made a few doozies and I’m sure you have as well.

Which brings up a question…

Wouldn’t it be great to know when you’re most likely to make a mistake? When you’re about to make a big financial oops? Commit a flub? A bad decision that will take you off the path to success?

I can’t tell you with certainty when that will be, but I can tell you what type of “environment” is most conducive for major mistakes to happen. And what is that?

It’s when you’re part of a group.

And the larger the group, the more likely you’ll make errors in judgement.

We all have a strong desire for avoiding social disapproval and exclusion. In other words, we want to be accepted, not disliked or rejected socially. This leads us to band together with others. The problem with this is that it can create conformity in our thinking. It can make us act and behave just like those around us, which may not be the best thing to do.

This phenomena is on display every day in the stock market. With no consideration given to critical analysis, countless “investors” just mirror each other’s actions. This provides the most perverted example the world has ever seen of mob psychology. When some start to sell stocks, everyone starts selling. When some start to buy stocks, everyone starts buying. It’s as if they’re embracing the junk science of “I’d rather be wrong in a group, than right by myself.”

Indeed, we all feel more comfortable as part of a majority. And why is this? Because being with the majority can act as a form of protection, a buffer if you will, against criticism. If we are wrong and everyone else is too, hey there’s less blame to go around, so goes the thinking. J.M. Keynes said it best: “Worldly wisdom teaches that it is better for reputation to fail conventionally then to succeed unconventionally.”

The problem with this should be painfully obvious – since when have the masses ever got anything right? Almost every major financial and social disaster known to mankind has been preceded with “group think”. Financial bubbles, cults and geopolitical crises come to mind as examples of otherwise sane and reasonable people regressing into wild-eyed sheep, ready to step on each other’s neck as they race to do something stupid. As Nietzsche said, “Madness is a rare thing in individuals – but in groups, parties, peoples, and ages it is the rule.”

Back to the sense of being protected and not to blame – following the masses also leads to overconfidence, impulsiveness and risky behavior because the group reduces the feelings of individual responsibility. It numbs us to our senses, most importantly our common senses.

Somebody Took The Time To Research This, Right?

Imagine a scenario where you and a group of 19 friends all receive what sounds like a hot stock tip, one that promises to double your money within a year. Now, all 19 friends decide to invest, and therefore so do you. And then… you all lose your money. How can this be? How can 20 otherwise smart people be fooled? Because of the “somebody” assumption. Each person automatically assumed that the other 19 people who invested had evaluated the investment opportunity. If there was something bad, surely somebody else would have said so right? Wrong. What happened is that nobody took the time to read and research the stock. Fail.

A mind-numbing example of group think happened in New York in the sixties. A young woman was stabbed to death in front of her apartment complex. Thirty eight people witnessed the act of brutality from their apartment windows…but not a single one of them called the police for help. Why? When interviewed, they all mentioned being alerted to the woman’s screams. They all remember seeing their neighbors lights come on and they could see each other looking out their respective windows at the horror unfolding below. When asked why they failed to act, they all said essentially the same thing – They thought that somebody else would do something and that if somebody didn’t do something, then there must be nothing wrong.  Incredible.

A friend-of-a-friend asked for my advice on his poor performing portfolio. In just a few minutes of talking with him, I could tell that he uses group think with his investments. No matter how much proof I presented to him that herd mentality is the reason his investment performance sucks, he persists in doing it. At least he’s consistent!

He invests in a fund of large, blue-chip American companies. Nothing necessarily wrong with that. However, every time the market dips a little he calls his broker and instructs the broker to cash him out. He then waits for the market to rebound and you guessed it – he calls the broker again and tells him he wants back in.

Now, does this guy do any research into the stocks that make-up his portfolio? Absolutely not. Not one minute has he spent reading about or analyzing the different businesses that comprise his use of capital. In fact, the reason he invested in the fund in the first place is because the broker suggested to him that a lot of people were investing in the same fund!

Let’s connect some dots shall we?

Since he doesn’t do his own diligence, he panics when the market dips. He panics because of ignorance – he is ignorant of what his own money is invested in. Fear and ignorance go hand in hand.

So, when the market goes down, he’s uncertain. And given his uncertainty he looks to see how others are reacting and follows suit. His assumption is that the other investors in the fund have done their homework, so he doesn’t need to. The sad irony is this – I’ll bet dollars-to-donuts that if you gathered the fund’s investors in a room and asked each of them individually if they’ve ever researched or analyzed the stocks in the fund, almost everyone one of them would say… no! You see, group think rarely, if ever, provides for better decisions. Rather, it’s just a vehicle for pluralistic ignorance.

I’ve often said that the people who do well in the stock market are not necessarily experts in analyzing stocks. Rather, they are experts in human psychology. Is it any surprise that Warren Buffett has said that you don’t need an above average IQ to do well in the stock market? That’s right. To do well, you just need an above average understanding of the human psychology of misjudgments. While were on Buffett, he had this to say about how he makes decisions – “My idea of a group decision is to look in the mirror.”

One of the best things I ever did for myself was to decide that my life would be up to me. In other words, I made a pact with myself to disregard what others were doing and to think for myself. I knew that if I tried to be very close friends to 100 people (I’m not even sure that’s possible), I would invariably fall victim to group think and possibly worse, that other social disease – trying to please everyone. Friendships and loyalty are great things. However they can also override a person’s desire to seek and take alternative courses of action…ones that they know are better.

The Madness Of Crowds

Remember, the more people don’t understand something, the more inclined they are to just follow the herd or someone who they believe is an “expert”. A terrible example of this is the Jonestown massacre. If you’re too young to know (or too old to remember), in the 1970’s cult leader Jim Jones persuaded over 900 people to commit mass suicide. Jones had moved his temple from San Francisco to the remote location of Georgetown, Guyana and enshrined his encampment as “Jonestown”. Experts say moving his congregation to such a remote area was a masterstroke by Jones, as he was able to create the conditions of uncertainty and exclusive similarity – a recipe for group think. As Professor Robert Cialdini wrote: “In a country like Guyana, there were no similar others for a Jonestown resident but the people of Jonestown itself.” Uncertainty. A lack of individuality. Panic. The presence of an “expert”. Everyone thinking that somebody would do something. The madness of crowds.

Unfortunately, what is popular is most often wrong. If everyone is doing something, my advice is to step away and be by yourself. Slow your brain down so that you can make a logical decision, not an emotional one. Don’t make big decisions (and certainly not financial decisions) in the presence of, or with, a group of people.

Yes, not following what others are doing can be awkward. But it leads to something awesome. Some of my very best financial decisions, I’m talking about million dollar decisions here, have come from being alone and giving my brain an opportunity to do what it does best. Is it any surprise then, that my very favorite quote of all time is from Pascal: “All of humanity’s problems stem from man’s inability to sit quietly in a room alone.” Indeed.

Follow Emerson’s words: “It is easy in the world to live after the world’s opinion; it is easy in solitude to live after our own; but the great man is he who in the midst of the crowd keeps with perfect sweetness the independence of solitude.” 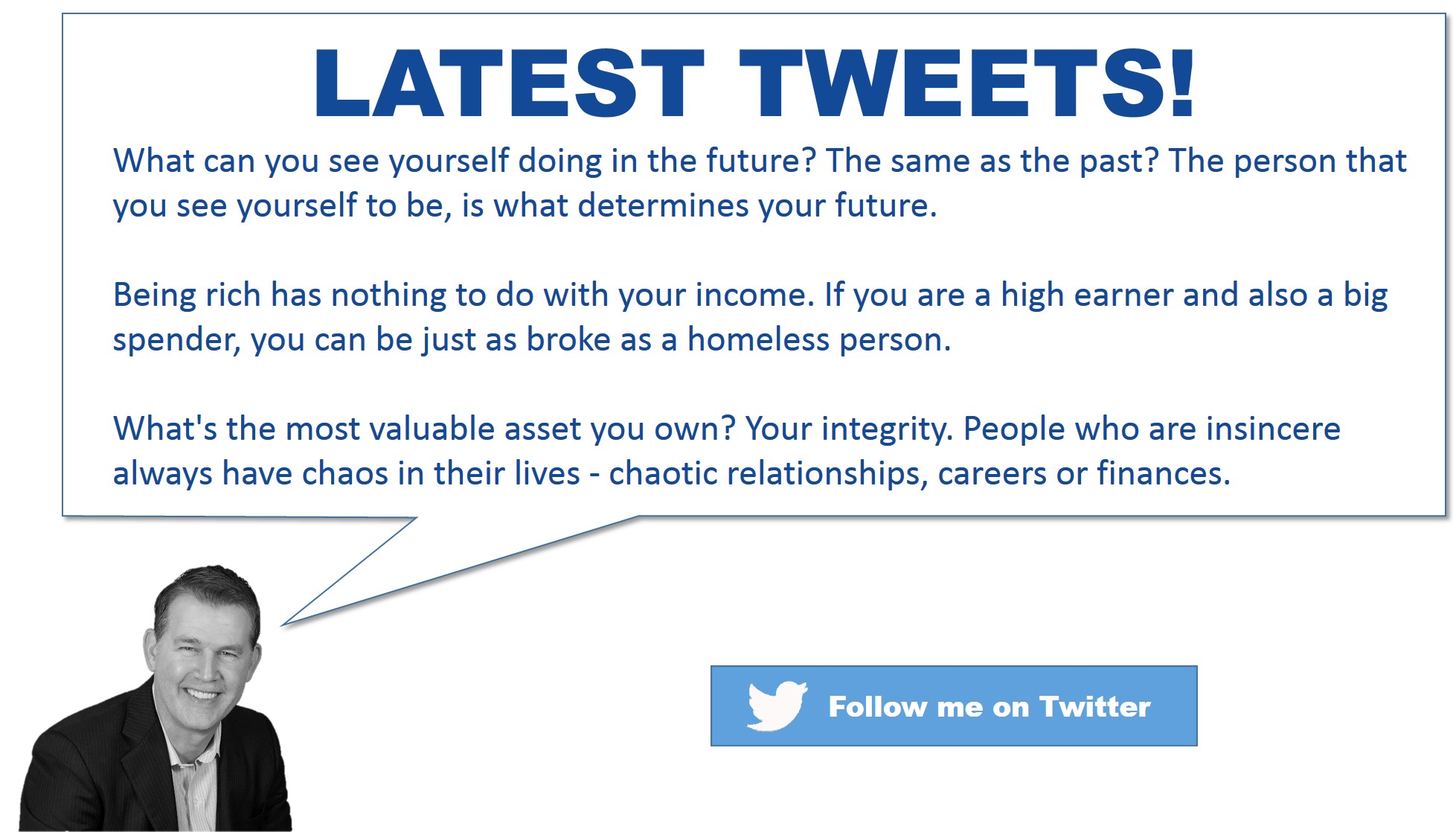 The “No Getters”. A Family Lost-Why Getting Rich And Staying Rich Are Two Very Different Things

Apocalypse Now! Doom & Gloom: Why You Should Ignore The Financial Doomsday Practitioners.

Thirteen Simple Thoughts That Changed My Life Forever. How Will They Change Your Life?