Want to know what Warren Buffett was doing when he was the age of most millennials today? Did he achieve his stated of goal of becoming a millionaire by age 30? What were the key turning points along the way in building his massive wealth empire?

What I always find interesting in looking at Buffett’s history, is that the majority of his wealth was earned much later in life. In fact, he didn’t become a billionaire until he was almost 60! (see chart below).

The timeline below is also very instructional for an investor dealing with the ups and downs of the market. Did you know that Buffett’s net worth fell by 50% in the 1970s due to market volatility? You see, the current volatility we see in the market is not different!

As you go step through this timeline, think about where you are in your financial journey compared to Buffett’s age at the time. Hopefully this will spark some ideas for your own path to a billion dollars!

1941 – Age 11
Warren buys his first stock. He purchases 6 shares of Cities Service preferred stock (3 shares for himself, 3 for his sister, Doris), at a cost of $38 per share. The stock falls to $27 but then climbs back to $40. Warren and Doris immediately sell their stock. Almost overnight, it shoots up to over $200 per share. Buffett later cites this experience as an early lesson for patience in investing.

1943 – Age 13
Warren declares to a friend of the family that he will be a millionaire by the time he turns thirty, or that “he’ll jump off the tallest building in Omaha.”

1947 – Age 17
In his senior year of high school, Warren and a friend purchase a used pinball machine at a cost of $25. Buffett begins to think about the potential profit, and places it in a nearby barber shop. Within months, he owns three machines in three different locations. The business is sold later for $1,200. This same year, he also earns over $5,000 delivering newspapers.

He applies to Harvard but is rejected.

He joins Columbia University and learns from his idol, Benjamin Graham. He makes an offer to Graham to work for free but Graham declines his offer.

Buffett returns to Omaha and purchases a Texaco station, but it did not go well. He was also working as an investment salesman for Buffett-Falk & Company, at his father’s brokerage firm.

In 1954, Benjamin Graham offered him a job for $12,000 a year. During this period, Buffett also worked closely with Walter Schloss.

1956 – Age 26
Graham retires and folds up his partnership. Since leaving college six years earlier, Warren’s personal savings have grown from $9,800 to over $140,000. Buffett returned to Omaha and on May 1, created Buffett Associates Ltd. Seven family members and friends invest a total of $105,000. He was now running his own partnership, and would never again work for anyone else. Over the course of the year, he opened two additional partnerships, eventually bringing the number under his management to three. Years later, they would all be consolidated into one.

1959 – Age 29
Warren is introduced to Charlie Munger, who will eventually become the Vice Chairman of Berkshire Hathaway, and an integral part of the company’s success. The two get along immediately.

1960 – Age 30
Buffett becomes a millionaire, achieving his first major goal of reaching this milestone by the age of 30.

1961 – Age 31
The partnerships are worth several million and Buffett makes his first million dollar investment in Dempster – a windmill manufacturing company.

1962 – Age 32
The Buffett partnerships are now worth $7.2 million. Buffett then merges all partnerships into one and renames it Buffett Partnerships Ltd. The operations are moved to Kiewit plaza, a functional but less-than-grand office, where they remain to this day. The minimum investment is raised from $25,000 to $100,000.

Buffett aggressively purchases Berkshire Hathaway (a textile company) paying $14.86 per share while the company had working capital of $19.00 per share. This did not include the value of fixed assets. Buffett’s partnership becomes the single largest shareholder of Berkshire Hathaway.

1964 – Age 34
Due to a fraud scandal, American Express shares fall to $35. While the world is selling the stock, Buffett begins to buy shares en masse.

1965 – Age 35
Buffett invests $4 million in Walt Disney (which is almost 5% of the company) after a meeting with Walt Disney himself . Buffett takes full control of Berkshire Hathaway and names Ken Chase to be the CEO.

1967 – Age 37
Buffett’s net worth is now $10 million. Buffett tells his partners that in the current raging bull market he is unable to find good investments.

1969 – Age 39
Following his most successful year, Buffett closes the partnership and liquidates its assets to his partners. Among the assets paid out are shares of Berkshire Hathaway. Warren’s personal stake now stands at $25 million. He is only 39 years old!

1970 – Age 40
Berkshire makes $45,000 from textile operations, and $4.7 million in insurance, banking, and investments. Warren’s side investments are making more than the actual company itself.

1973 – Age 43
Stock prices are dropping and Buffett is elated. Berkshire starts buying stocks in the Washington Post company. Buffett becomes close friends with Katharine Graham who controlled the company and its flagship newspaper and becomes a member of the board of directors.

1974 – Age 44
Due to falling stock prices, the value of Berkshire Hathaway’s portfolio begins to fall. Warren’s personal networth falls by more than 50%.

1975 – Age 45
Buffett merges Berkshire and Diversified – the firm controlled by Munger. Munger gets 2% stock of Berkshire and becomes its vice chairman.

1976 – Age 46
Berkshire invests $4 million in GEICO Insurance when its stock price was just above $2. Buffett continually invests in GEICO until 1996, when Berkshire acquires the company. 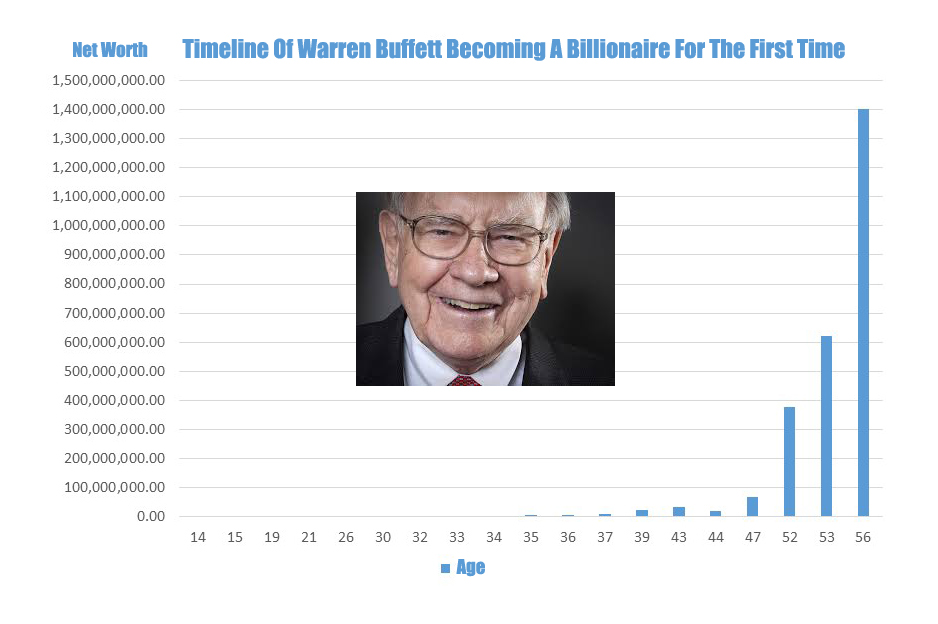 1982 – Age 52
Buffalo Evening News is the only local newspaper of Buffalo and its name is changed to Buffalo News.

The newspaper earns $19 million in its first year without competition. By the late eighties, the Buffalo News is earning $40 million a year.

1983 – Age 53
Berkshire merges with Blue Chip Stamps which was a majority owned subsidiary of Berkshire.

Berkshire’s portfolio is worth $1.3 billion.

Warren’s personal net worth has ballooned to $620 million and he makes the Forbes list for the first time.

Buffett is forced to leave the board of Washington Post, as legislation at the time prohibited him from sitting on the boards of both Capital Cities and Washington Post.

I hope you’ve enjoyed this trip down wealth lane! If you would like a complete history of Warren Buffett, I highly recommend Alice Schroeder’s biography of Buffett, entitled The Snowball. Read it and start rolling your own snowball to wealth today!

Ready to read more posts about Warren Buffett that can help you build your billions! Check-out these other posts from the blog archives.