There are millions of articles on the Internet today that claim to teach someone how to achieve success. These articles list common traits many successful people possess, such as persistence, discipline and a strong work ethic. I’ve written a few of these types of articles myself!

But today I want to discuss something that’s not typical. You see, for over 25 years I have studied people that have built wealth and I found that what contributed to their massive success was not what society typically considered valuable traits.

People like Warren Buffett, Bill Gates, and John D. Rockefeller certainly achieved wealth by following sound money principles. However, they also had some peculiar traits that, on the surface, many may perceive to be a less than favorable.

That is, until you look a little deeper…

Here are 12 things society may consider a liability, but which can actually be great indications that you are meant to be successful:

1. You say “no” a lot. People who experience success know how to concentrate. They realize that they cannot do everything and they focus on the activities that will give them the highest return on the goals they want to achieve. They don’t believe the hype of “multi-tasking” and they also know that to achieve something great, they have to cut out everything, and everybody, that isn’t contributing to their success.

2. You are easily bored. If you find yourself easily bored you know how others may view this as a problem. Nothing is wrong with you except that you are bored with activities that aren’t up to your potential and aren’t challenging you. This lack of challenge is why you probably hated most of the jobs you’ve had up to this point.

3. You can’t tolerate vagueness. Successful people constantly seek clarity in their lives. They know what they want and they follow their own dream. They also know that vague desires and beliefs lead to vague outcomes. It is this sense of direction that gives them the staying power to stick to their goals and achieve their dreams.

4. You have an authority complex. Greatness lies outside of the lines and boundaries of authority and you now think that rules, policies and regulations simply don’t apply to you. You have been labeled a rebel, a rule breaker and you would defy gravity if you could.

5. You’ve become a realist. Extraordinary people have realistic optimism. Realistic because they take action and optimistic because no matter what the result may be, they believe their success is inevitable. They believe that like a child learning to walk, they need to take action first and then modify the action according to the feedback that they get. This positive attitude allows them to persevere and be resilient when things don’t go their way.

6. You refuse to accept the status quo. Doing something the ‘time-honored’ way doesn’t make sense to you when there is no explanation as to why. You don’t like to sit idly by, you refuse to just go through the motions and you absolutely won’t follow the pack. You know that there’s nothing more insidious than being a conformist.

7. Time works for you now. Successful people are successful because they get a lot done. The only way to do that is by making the most out of the allotted 24 hours we all get. Extraordinary people value their time and see the direct connection between how they spend their time and their well-being. They are usually always on time and “train” those that deal with them to respect their schedule.

8. You’ve become obsessed. You may have been labeled obsessive because when you get started on something you have a difficult time letting go of it. Others have tried to convince you that this is a “disease” or deficiency. But you know better. You know that all successful people become completely immersed in their vision—obsessed.

9. Your courageous. Everyone’s heard the phrase “No risk. No reward.” but how many people really take the risk necessary to get the reward they want? Not many but for those who do, they are the ones who make it and become successful. Successful people have the courage to begin AND the courage to continue. They are willing to not only bet but go “all in” on themselves. They are not afraid to burn bridges if it means moving forward.

10. You’re ready to give. Successful people are generous givers. They know and are convinced of the “secret” that the more you give, the more you receive as long as you are genuine about your gifts. They operate on the principle embodied by Zig Ziglar’s quote, “You will get all you want in life if you help enough other people get what they want.” If you haven’t tapped into this idea, you should get started right away. Money isn’t the only thing you can give. You can give time, expertise, space, etc. Look for ways to open doors for people.

11. You’ve stopped talking. We all know of people who talk a big game but accomplish nothing. Those who spend all their time thinking about doing something will never succeed. Successful people are doers and not talkers. They don’t wait for conditions to be perfect before they take action. They just go for it. Those who don’t achieve much with their lives, tend to use “would”, “should” and “could” a lot. Those who do get what they want are too busy achieving their next goal and can’t be bothered with mindless chatter.

12. Your gut is your best friend now. People who succeed in life trust their “gut”. They may not be able to explain rationally why or how they made their decision but they knew it was the right thing to do. Successful people learn to harness the power of their subconscious by sending it “orders” from the conscious mind. This involves mentally visualizing the outcome beforehand and then being present to take in the data and information that will become the ingredients for your subconscious to deliver the “orders” that was sent.

Think of these indicators as a way of applying filters to your life to know if what you’re doing will spawn success. And then get busy spawning success in your life! 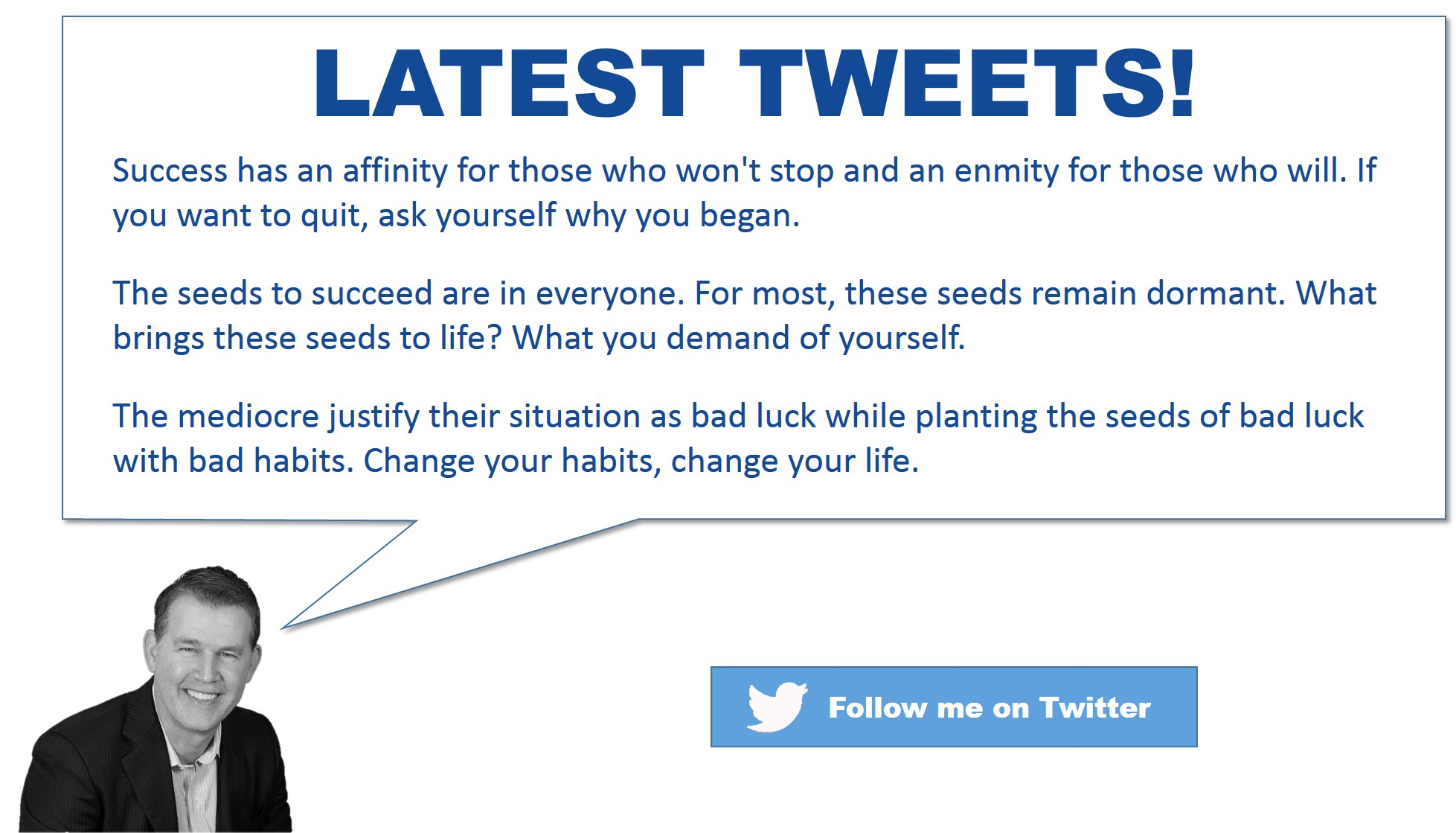 Invest $10 Trillion Dollars And Get A Below Average Return? Why Most Mutual Funds Underperform

A Wasted Life: Most People List This As Their Biggest Regret In Life. Here’s How To Avoid It.