From the song “Opposites Attract” by Paula Abdul:

Now you’re going to have this song stuck in your head all day. 🙂

I’m sure Paula Abdul’s focus for her hit 80’s song “Opposites Attract” wasn’t financial freedom, but she couldn’t have been more correct in her lyrics, especially when it comes to money. Along money lines, opposites do seem to attract. And there’s also something else true about opposites – they can attack.

I often speak to couples about their money problems and one pattern seems to emerge over and over again:

It doesn’t take a chemical engineer to know that this contradiction in financial mindsets sets-up a battle royale between couples that’s more intense than a championship cage fighting match! 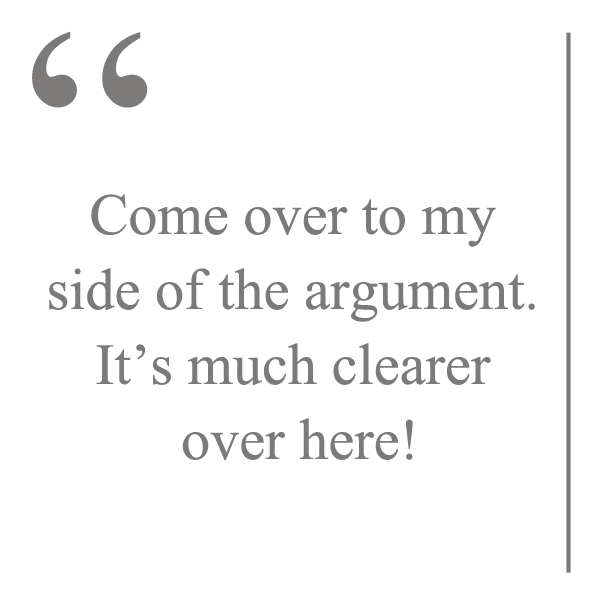 In fact, a recent survey completed by the American Consumer Credit Counseling found that, of all topics, money is most likely to prompt a fight in a relationship. An overwhelming 54 percent of survey respondents stated that financial issues are the leading cause of stress in their relationships, while only 5 percent of respondents indicated fidelity and trust were an issue and oddly enough, 9 percent cited in-laws as the biggest stress trigger! That reminds me of what one happy woman said of her in-laws: “I get along perfectly with my in-laws because they’re considerate enough to live very far away.”

Given that money is such a large contributor to relationship issues, you would think that couples would get things figured out with their finances so that they could get on with the very serious business of being each other’s honey snookums. Yet, many married couples fight about money. Constantly.

And the reason for this?

The one who is good with money typically doesn’t know how to talk with the financially negligent spouse about finances. They reason that a conversation about money will just start World War III (and it usually does) and so they avoid it. Or, if they do have “the” talk, they do it all wrong, pushing the non-money spouse even further away from financial togetherness.

If you find that financial conversations with your spouse have been as fun as a colonoscopy, here are three tips you can use to have a better money talk:

This is probably the biggest mistake I see spouses make. The play the blame game and it usually starts like this: “If you would just change your ways, we would be better off financially!” This approach makes your spouse the scapegoat for the entire problem and the conversation stalls out. Remember, your spouse most likely got his/her money “blueprint” from their parents. In other words, their money problems are probably deep rooted and the symptom of something larger. The more you focus on correcting the symptom instead of the root problem, the greater your frustration and possible damage to your relationship.

So what is the root problem of our spouse’s issue with money? Most likely fear. Money is used in a limitless number of ways to calm fears we have and faced with the prospect of limits to money (i.e. budgets), some behave very irrationally. So, instead of condemning your spouse, seek first to understand why they behave a certain way with money. Ask them this question – “What is your general philosophy towards money?”. You’ll probably discover a lot about your spouse that you didn’t know. Seek to understand first, then to be understood. A little bit of sympathy could go a long way with healing the money problems in your relationship and set the stage for later discussions about better money principles.

Get on the same team

Many couples, especially newlyweds, struggle financially because they are so used to making financial decisions independently. Overnight, they may merge their bank accounts together but fail to ever merge their financial behaviors. This sets up an oft-repeated, yet financially wrong, way to approach finances where one spouse is “in control” of the finances and the other spouse is totally oblivious to how money is made, and spent, in the relationship. I see many couples adopt this arrangement and they do so primarily to keep the peace. But it’s wrong. Dead wrong. You see, couples don’t tend to fight about the mortgage because that’s a choice you make together. Couples typically fight about the money decisions made separately.

The best marriages financially are where everyone gets a vote, and everyone votes. If you’re spouse is on the “outside” of your finances, tell them that starting today you want to work together to get out of debt and build wealth. Two horses pulling a wagon can pull a huge load up a hill if they work together. But pulling in opposite directions will simply turn the apple cart over. Do a budget together. Pay bills together. Plan for the financial future together. It may be difficult at first, but doing these things together will create better communication in your marriage.

One of the most frequent mistakes that I see married people make when trying to get their spouse’s spending under control, is to corral. By corral, I mean that they put limits on their spouse’s credit cards or give them a monthly stipend to keep their spending from stampeding away like a herd of wild horses. While this may stop the spend hemorrhaging, it’s a terrible long-term solution because it doesn’t teach the financially negligent spouse anything about money. In fact, it reinforces the belief in them that money is something that they cannot handle. That only you can handle it. And no surprise, they never learn to manage money. The analogy would be trying to teach a teenager how to drive by forcing them into the passenger seat. They’ll never learn to be a responsible driver that way.

The better way, is to teach your spouse how to be responsible with money by explaining the concepts of budgeting, paying credit card bills off each month, delayed gratification and spending limits. Yes, this will be a much more difficult conversation than simply putting a limit on their credit card (which is why most spouses elect not to do it), but in the end you’ll gain a financially saavy spouse who will have learned how to handle money on their own.

Expect the conversation to go slow and have a lot of setbacks, as they will most likely recoil to new money ideas like a kid does to taking medicine. Hang in there, go slow and most importantly make the conversation about rewards. Instead of telling them what they can’t do, tell them what they can do as a result of better managing your money. For example, show them that budgeting now will allow you both to take that European vacation you’ve always wanted to take next year. Before they know it, you’ll be soaking in the sun and good times in Monte Carlo!

Money is a tough topic to talk about. Especially if you and your spouse have different financial mindsets, it won’t be easy to have the conversation. But “the talk” does not have to be something that tears the two of you apart. If done correctly, it will be something that brings the two of you closer together as you: communicate honestly and sensitively, solve problems as a team and most importantly, plan for your financial future!

Want even more information about talking and walking the financially free life? Check-out these other articles from the blog archives:

How To Make Each Other Hot Between The Sheets: A Valentines Day Special Post

Do You Have An Elephant Mindset?