10 years ago, Warren Buffett made a very interesting bet.

He bet any comer that a simple, low-cost investment in the S&P 500 would beat a hedge fund strategy over 10 years. On the line was $1 million, to be paid to a charity of the winner’s choice.

To put that into perspective, Buffett was saying that simply investing in a passive index fund (the opposite of actively picking stocks) would beat the professional stock pickers over a given 10 year time period.  That’s right, Buffett was wagering that the little guy could beat the big guy, at the big guy’s own game.

Buffett won that wager handily, ending the ninth year of the bet up 85.4% vs. 22% for a collection of five hedge funds. The hedge-fund manager who took him on, Ted Seides, has thrown in the towel, conceding that a passive investment in the stock market was unbeatable.

But Mr. Seides hasn’t gone quietly into the night…

Rather, he wrote a long-ranging mea culpa of sorts on Bloomberg, explaining away his loss to Buffett. And here’s where I come into this, offering my responses to his reasons for losing… to provide a learning opportunity for all investors.

“The higher the price an investor pays for an asset, the less he should expect to earn. When we made the bet in 2008, the S&P 500 traded at the high end of its historical range. Probabilities strongly suggested the S&P 500 would generate low returns in the future, which would have helped the relative performance of hedge funds. But the S&P 500 defied the odds and rewarded investors with a historically normal 7.1 percent nine-year annualized return.”

“You are exactly right. Price does matter significantly to returns. But that has nothing to do with making predictions about the market. In the same paragraph, you simultaneously state that the S&P’s performance was both unexpected and also in-line with historical averages. Both statements cannot be simultaneously true. Having performed in-line with historical averages cannot be showing unexpected strength. And here in lies the market predictor’s dilemma – they have a weatherman’s approach to predicting. “There’s a 50% chance of rain tomorrow” tells you exactly nothing and also makes it impossible for them to be wrong. It is very difficult for a man to understand something when his salary depends upon him not understanding it. Remember, nobody including Buffett can predict the market nor should you ever make investment decisions based on what you think will happen in the market next. The key to investing is to buy high-quality businesses at attractive prices and hold them for a long time, not trying to time the market when you think it could be advantageous to you next year. The market is not there to inform you, it’s there to serve you.”

“Warren and I have written during the past two years that he will win the bet absent a market crash. Hedge funds tend to significantly outperform in bear markets, as demonstrated in 2008 and 2000-2002. These same risk-mitigating properties tempered hedge-fund returns in the rally that began in March 2009.”

“Yes, hedge funds do tend to do better in bear markets because hedge funds can take either side of a trade, bullish or bearish. However, that’s not the magic formula for investing success either. Virtually every single commodity has fallen in price, some significantly so, during the bet’s timeframe. Aren’t those bear markets? Why didn’t the hedge fund strategy exploit them? Hedge funds didn’t lack from bearish investment opportunities over the last ten years, they just didn’t exploit them. What makes this worse is that hedge funds tout their abilities to “read” the market both ways. The truth is that they cannot “read” them any better than the average investor, who is typically only taking one side of the trade – bullish. The stock market has long demonstrated the ability to surprise investors who think they have a crystal ball. That is Buffett’s fundamental point.”

“The S&P 500 index fund fell 50% in the first 14 months of the bet. Many investors lacked Warren’s unparalleled fortitude, and bailed out of the markets when the pain became too severe. An investor who panicked and only later re-entered the market would have found that his bank account at the end of the bet was a lot smaller than a hypothetical account in which he earned the index-fund returns for the whole period.”

“You are right. The error, however, is believing that a costly, actively managed hedge fund approach is the best way — or even a good way — to reduce the emotional risk of long-term investing. A low-cost portfolio of index funds would do it, too…and did. I think this is the fundamental selling point of the hedge fund industry – you, the average investor are too emotional with your investment decisions (they’re right). Therefore, let our unemotional guys and gals do your investing for you. Um, no. Your “unemotional guys and gals” are just as emotional as the next guys and gals, as proven by your track record.  What’s the best way to reduce emotional risk of long-term investing – again, buying high-quality businesses at attractive prices. The lower purchase price provides a “margin of safety”, a cushion if you will, for the stock’s inevitable ups and downs. If you bought XYZ stock for a bargain at $10 a share, why would you care that the stock is bouncing between $45-$50 a share five years later? You wouldn’t. You don’t normalize the emotional side of investing by claiming to have a “superior” strategy. You normalize it with sound investment decisions.”

The reason that the hedge funds strategy lost here starts with the hedge fund industry’s fees, typically 2% plus an incentive, or “carry,” of 20% of the profits. That means the hedge funds have to do far better than the index fund just to break even.

In fact, the S&P 500’s returns over the past nine years were only mediocre—about 7.1% a year. But to deliver an equivalent return, net of fees, a typical hedge fund would have had to earn about 9% year. Very few money managers can consistently outperform the market by 2½ percentage points a year.

At Berkshire Hathaway’s annual meeting, Buffett said the bet’s results demonstrate the value of being “slothful,” i.e., patient, as opposed to hyperactive. Trading costs money, and moreover, investors who churn their portfolios are likely to trade in and out at ill-advised moments.

Many (not all) hedge funds deliberately try to balance long and short investments. They do this, usually, not because they are either bullish or bearish, but because they do not want to be exposed to downturns. However, such a strategy will usually tamp down total returns. In a rising market it will tend to give up gains, just as it will lessen losses in a falling market.

I am not, at all, disputing that some hedge funds can and do beat the market. But most don’t over long periods of time. This is exactly the point of Buffett’s bet and why he won.

Be smart and patient with your investments. Take your time and learn from the greats instead of trying to invest in something “sexy” with a unreliable track record. That’s the way Buffett did it and that’s the way I did it….and that’s why I’m financially free. 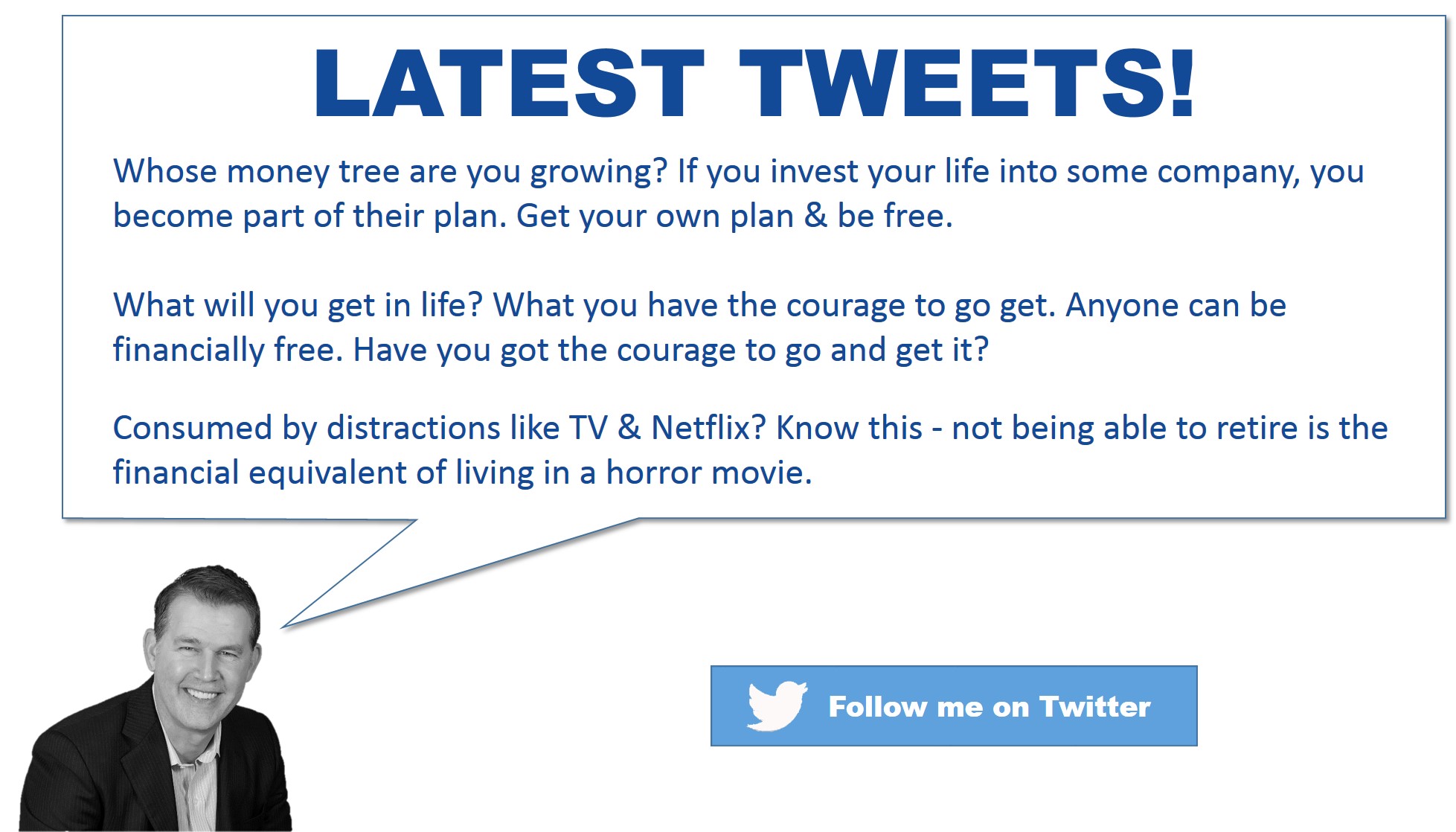 Would You Reject Free Income? These People Did, Because They Knew It Would Make Them Miserable.

The Way To Wealth: Benjamin’s Franklin’s Timeless Advice For Becoming Part Of The One Percent!