They say that only optimists can become entrepreneurs and investors. That’s probably true. And while I’m a big fan of optimism and what positive thinking and actions can do in your life, there is a dark side to too much optimism in investing. Mae West famously said, “more of a good thing is a good thing” and that’s true of most things, but in investing it can lead to costly mistakes.

I’ve sat through many investment presentations and they all have the same format – the presenter spends 45-60 minutes telling the group of potential investors everything that could, and most likely will, go exactly right with the investment opportunity. They speak to how it has great potential, little to no downside, and how it will make the investors a ton of money. The presenter then opens the floor up to questions and most of the questions also follow a similar format – they seek assurance from the presenter, that investing in the stock/business/real estate opportunity presented, will ultimately be a wise and wildly successful venture.

Rarely do I see investors or those presenting the investment opportunities, ask this most important question that should be asked of every investment… what could go wrong?

Psychologists tell us that our brains seek favorable outcomes in our investing so much, that we tend to significantly discount the likelihood of something bad happening relative to that investment. The fancy term for this is confirmation bias. It is the tendency to search for, interpret, favor, and recall information in a way that confirms one’s preexisting beliefs and to practically ignore everything to the contrary.

We’re also very bad at guessing probabilities of something happening. Consider a party attended by thirty people: what are the chances that two of them have the same birthday? One in twelve, or, roughly 8% (30/365)? After all, it’s a 1 in 365 chance someone will share your birthday, and that would mean that there’s 30 shots at winning, right?

No, the odds are significantly better than that. In fact, there is a 70.6% probability. This is known as the “birthday problem”. The apparently miraculous breaking of odds is attributed to the fact that the question is “what is the chance that any two people have the same birthday?”, whereas most people following common sense tend to translate the question as “what is the chance that someone will have the same birthday as me?”. So while you get 30 shots at this 1 in 365 lottery, so does everyone else. More specifically, every possible pairings of two individuals in the group of 30 has a shot at this 1 in 365 chance. Regardless, the answer is very non-intuitive and is a good display of how people don’t do well at guessing probabilities. Once the problem is known, however, calculating the real odds is just a simple case of exploiting the correct mathematics.

Here’s another one – When we hear that there’s a one in a million chance of x happening, we usually translate that in our brains to “x will never happen”. And that would be absolutely wrong. What “one in a million” means, is that for every million occurrences, x occurring is likely, if not very likely, to happen. Improbable does not mean impossible. Improbable things happen all the time. Even an event which has a probability as low as 1 in 1.9 billion is quite likely to happen, if it has 735 million opportunities to happen.

So, how does this relate to investing?

The challenge comes when making decisions where mistakes result in serious negative consequences.  Most people have enough common sense to at least pause when making decisions involving important business or personal matters.  However, when we pause, we may not be directing our attention in ways that necessarily reduce risk or improve outcomes.  Many decisions of great magnitude are made without any real analytical rigor, relying instead on “gut feelings” and other emotional shortcuts.  How many investors, for example, prepare detailed financial models, read company filings, listen to management presentations, and take the other analytical steps to make the final buy or sell decision? Let’s be honest, making important decisions of a personal nature based on instinct alone are way more common.

When Charlie Munger was asked what one word accounted for his remarkable success in life, his answer was “I was rational”. Indeed, he and Warren Buffett’s #1 rule of investing is this – “Don’t lose money”. Many seriously pervert this quote to mean that they should pull their money out of an investment that has gone down. That’s not what Buffett means at all!

What Buffett is saying, is that if you make it your goal to not lose money in investing (instead of focusing on how many pots of gold you’ll be carrying home) you’ll be less likely to make all the stupid mistakes that befall common investors.  There’s a reason it’s called blind optimism. It’s because too much optimism can blind you to the real facts.

By focusing first on how you can keep from losing money, you flipping the confirmation bias around on its head. Rather than searching out only positive news articles that support your investment hypothesis, you embrace a healthy skepticism about investment opportunities. After all, in investing your first priority should be to get it right, not to be right.

And if you’re reading this and are left feeling that this sounds way too mundane and certainly less sexy than focusing on all the millions you could make, know this – when you focus on what could go wrong with your investment opportunities, the upside generally takes care of itself. This is the essence of Buffett’s “never lose money” rule.

I’ve seen the “focus on what could go wrong and the upside will take care of itself” model playout favorably many, many times in my investments and also in other facets of my life.

We have a divorce rate of 50% in this country. If you asked every couple on their wedding day, what’s the likelihood that their marriage would end in divorce, they would all exclaim “zero!”. Yet, statistics show that exactly half will be completely wrong.

I approach my investments in the same way. The first thing I do when I find an investment opportunity is that I try and break it down and prove myself wrong. I build antidotes to my inherent biases by looking for disconfirming evidence – killing my own ideas – and I under-weigh extra vivid information (ex. overly enthusiastic sales people) and overweigh less vivid information (the investment’s fundamentals).

So, the next time you’re researching an investment opportunity, look for what could go wrong, not how you’re going to knock it out of the park. I will tell you that most successful investors got that way not by hitting grand slams, but by avoiding striking out in big way. Rocket rides to the moon are fun to watch, but rockets always return to earth.

If you do nothing more in life than just avoid the major mistakes that most people make (wrong investments, wrong spouse, associating with the wrong people), you’ll be way ahead of the crowd, trust me. And remember, looking at the flip side of your optimism does not make you a pessimist or a naysayer. It makes you the opposite of a blind optimist. It makes you diligent.

I know that it’s a lot easier to only think of what could go right with investments, all the money you’ll make, but I know this as well – cliffs are most dangerous to those who wander in the dark. Be someone who favors turning the lights on and remember, sometimes the best investment advice is what not to do. 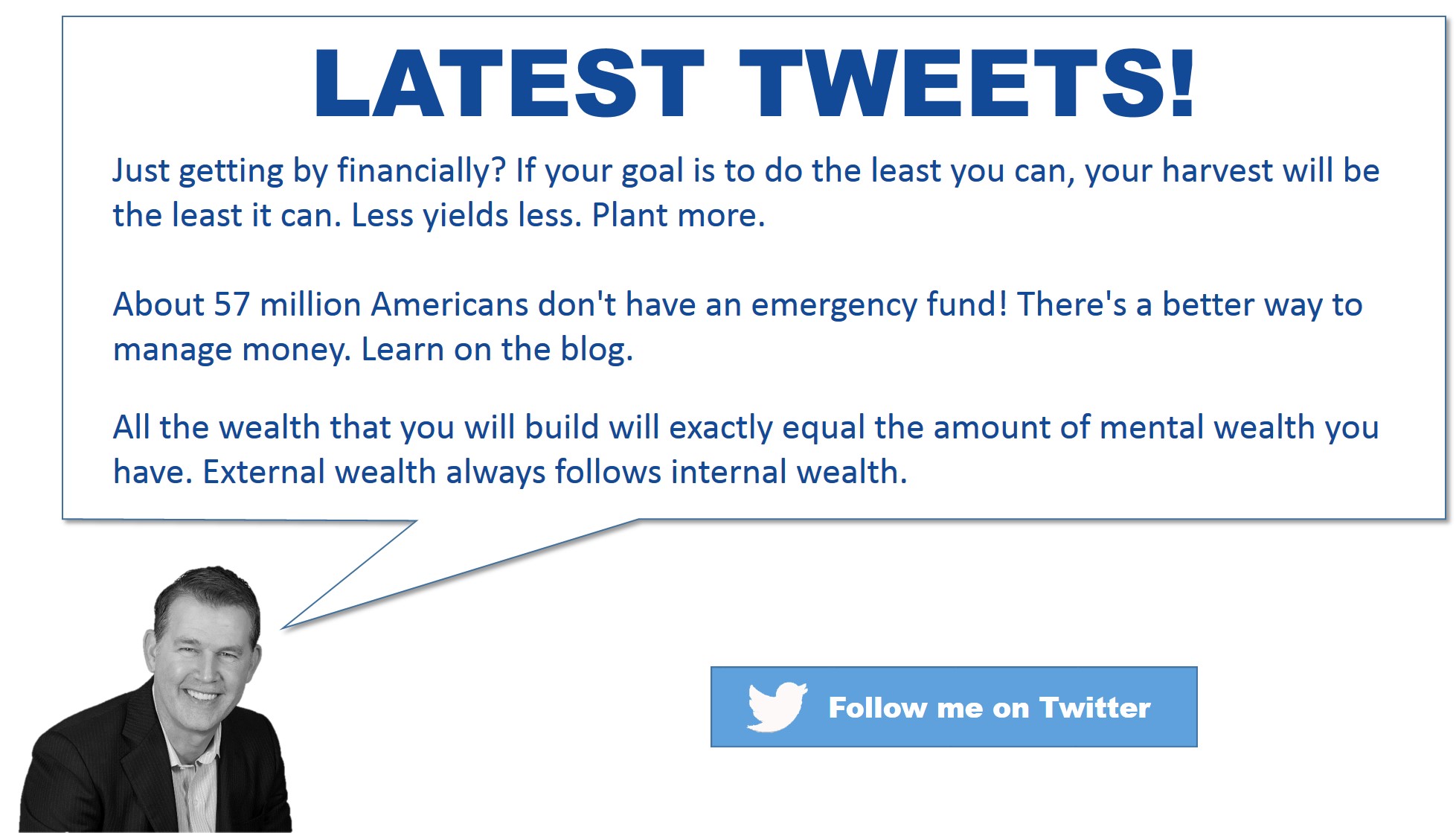 If You’re Not Teaching Your Kids To Become Rich, You’re Teaching Them To Become Poor

Cliche-The Most Important Things In Life Are Not Taught In School. Here’s What’s Not Taught.