Got a hypothetical question for you today.

Let’s say that you live in proximity to an active volcano. Hey, maybe it’s on a cool island!

The problem with island life is that the darn volcano erupts…with all too regularity. Mount Spewsonus rains ash and pours lava about once every 10 years.  You and your neighbors evacuate each time and once the volcano is done with its business, you return and rebuild your homes.

Now, here’s where it gets interesting.

Let’s say “Old Sparky” starts to get more active…much more active. Let’s say Victor the Volcano erupts four times in each of four years.  And each time you rebuild your home.  You’re a trooper. You’re not going to let that volcano beat you. “Take that Sparky!”, you exclaim.

But then, the unthinkable happens. the volcano erupts for the fifth time. That’s not all. Scientists and volcanologists (what a cool job title) are predicting that Sparky is just getting started. They predict that he’ll erupt and destroy the village every year for the next 20 years.

And now, the hypothetical question…

Would you rebuild your house again in the same spot?

But if we were to draw parallels to personal finances, I can tell you that many would rebuild on the same shaky ground. They’d get busy rebuilding right on the same troublesome spot. With the same materials and same obliviousness. And then proceed to fail again and again.

And the scary thing? It’s none other than their brain that brings them back to this place of failure. Yep, just as if they were under the mind control of Supreme Leader Snoke (if you’re not a Star Wars fan, look it up), resistance is futile. They keep repeating the same mistake, over and over.

When we do something, anything, we create neural pathways in our brains. Imagine that you have to cut through a thick jungle with a machete. It’s hard work and takes a lot of time but eventually you create a path. So, what happens when you need to cross the jungle again? You take the path you just created.

These pathway can obviously work for us, as the habit of saving money is good neural pathway. But just as you might expect, we can create some not-so-good pathways. And that’s the very reason some keep making the same mistakes, is that they slip back (by default) into existing neural pathways.

You’ve heard the oft repeated phrase – Wisdom comes from experience and experience comes from mistakes. That’s true. It seems our brains do learn from making mistakes: If were not careful, they learn how to make them.

There’s an old quote that goes something like this – “Our past mistakes come back to us sometimes, just to see if we’re still stupid.” Funny, but true.

Friends, if you’re seeing the same financial mistakes over and over it’s probably because you’ve trained your brain how to make them. You’ve created a neural pathway to failure and you’re just taking that trail each time.

And don’t be fooled here – If you’re regressing financially (the bank balance never lies), then you’re most certainly repeating the same mistakes, but perhaps with a different façade.

Here’s what I mean.

There’s a gentlemen that’s asked for my financial advice several times recently. He’s struggling financially. He’s been struggling for a long time and unless he changes, he’ll struggle financially in the future.

As a result of his past actions, he’s created the habit (neural pathway) of short-sightedness. Every financial decision he makes gets looked at thru a 30 day lens, with no regard whatsoever to the future. And when the future comes (it always does), it slaps him across the head. The volcano erupts again and destroys his financial house.

You’d think he’d rebuild elsewhere, but he doesn’t. He comes at the neural pathway a little different each time but ultimately he fails, essentially just rebuilding in the same bad spot each time. He’s convinced himself that he’s not repeating the same mistakes because…he keeps rebuilding the house in the same spot,  albeit at a different angle! His brain is directing him, almost subconsciously, down the same neural path.

So, if our brain sort of nudges us onto these pathways, whether they are good or bad, how can we override it when it sends us down a bad pathway?  Glad you asked.

The Easiest Person To Fool

As noted scientist Richard Feynman said, “The first principle is that you must not fool yourself – and you are the easiest person to fool.”  Indeed, the first step to stop repeating the same financial mistakes is awareness that you can be easily fooled by your brain to make it.

For instance, maybe you keep getting into the same kind of unhealthy financial situations such as running out of money and having to buy necessities with credit cards. Or maybe you chase hot stock tips and get rich quick schemes, only to circle back months later to exactly where you began, just with a smaller bank balance. Maybe you repeat the mistake of rarely finishing things that you begin – like that investment book you’ve started reading several times but have never finished.

Whatever it is, if it seems overwhelming and impossible to change it’s because your brain is working against you at the moment. We don’t always do the right thing, but rarely do we do random things. That means that whatever you’re doing that you need to stop, you’re doing for a reason. Do some soul searching to find out what that reason is. Are you overspending to fill an emotional void? Maybe you’re too proud to admit you’ve been wrong about past financial decisions. Again, whatever the answer is for you, bring it to light so that you can start dealing with it.

Make a mistake once, it’s an accident. Make the same mistake a second time? It’s on purpose.  Make it a third time, it’s no longer a mistake…it’s a habit.

Instead of beating yourself up for picking up a bad habit, focus on replacing it with something positive. Remember, whatever you resist persists, so don’t obsess over making the same mistakes you made before, but instead, focus on replacing that bad habit with a good one that serves the a better purpose. If your savings account is anemic, make a game out of measuring how high your savings account can grow. Give yourself a different positive affirmation and learn to crave the high of building your net worth instead of getting a high from shopping. If you know you’re spending more than your making, ask yourself this life-changing question – Am I headed down that same old path?

While we’re at it, here’s some more advanced questions to ask yourself:

“What am I likely ignoring here, just to satisfy my brain’s default need for comfort?”

“Is this just a new version of the same old mistake I’ve made before?”

“Have I thought this through, or am I just relying on a magic plan again?”

The answers to these questions bring enlightenment. And they create something else that’s even more important – a new path. When you ask yourself “why is this?” type of questions, you’re literally telling your brain to forge a new neural path. You’re saying “I open to a new way” to your brain. And remember, neural paths work for both good and bad habits, so you’re brain gets busy doing what you want – forging a new path to a better habit.

Remember, in situations where you repeat the same mistakes (or the same type of mistakes) the problem is often that people have come to prefer the familiar over the unfamiliar. They exchange what they desperately need, for the secure feeling of being in control. And nothing makes them feel in control more than just repeating what they’ve always done.

Mistakes happen. But mistakes that are repeated with regularity turn short-term setbacks into long-term losses and temporary pain into long-term suffering. Don’t rebuild in the same bad area, expecting a different results this time. Learn from past mistakes, grow from them, and soar above them. 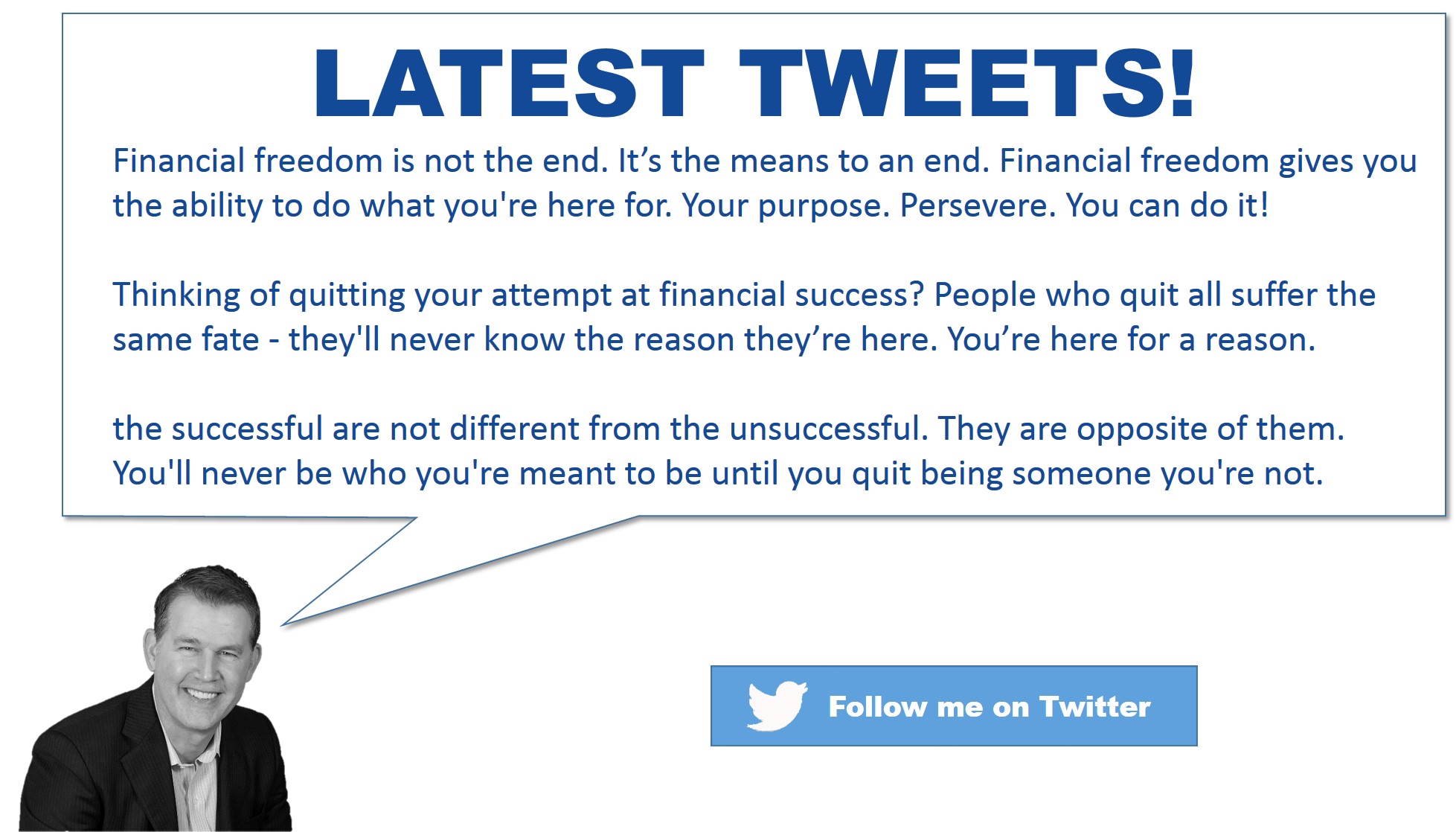 How To Build Hurricane And Earthquake Proof Wealth, Courtesy Of Warren Buffett

Still Waiting On Superman To Rescue You? He Just Called And Left This Message For You…