Five seagulls are sitting on a dock. One of them decides to fly away. How many seagulls are left? Did you answer four? That’s incorrect. There are still five. Deciding to fly away and ACTUALLY flying away are two very different things.

Despite popular belief to the contrary, there is absolutely no power in intention. The seagull may intend to fly away, may decide to do so, may talk with the other seagulls about how wonderful it is to fly, but until the seagull flaps his wings and takes to the air, he is still on the dock. There’s no difference between that gull and all the others. Likewise, there is no difference in the person who intends to do things differently with money and the one who never thinks about it in the first place.

Have you ever considered how often we judge ourselves by our intentions while we judge others by their actions? That’s the topic of today’s essay.

“Don’t wish things were easier. Wish that you were better.” –Jim Rohn

A long while back, a friend of a friend contacted me wanting some financial advice. As I listened to her explain her current financial situation, it was clear that she had made some major mistakes with her money. On top of taking several wrong turns financially in the past, she also wasn’t practicing any of the basic financial principles like budgeting and saving in the present.

When I asked why she was just now seeking help with her finances, her answer stunned me – “I was too embarrassed to seek help. I was afraid someone would judge me”, she said.

Nobody likes to be judged, but guess what? We are all judgmental. Sometimes that’s a bad thing – if we jump to conclusions about someone, are wrong, and wind-up hurting someone. But sometimes judging others is a good thing – If we are alone at an ATM machine at night, and a menacing-looking individual starts running towards us with a knife, trust me it’s OK to be judgmental about that person!

So, judgment, for all its negative connotations, can be useful. Now, I want to be clear here. In this essay, I’m not talking about someone else judging you. I’m talking about you judging you. You see, the lady referenced above was so afraid of someone judging her, she wasn’t even judging herself.  In my estimation, her biggest problems with money were because she was too fragile on herself. Using Rohn’s quote, she wanted things to be easier, not for herself to become better.

Look, financial reality can be a mess. It can cause people to be stressed, humiliated and in denial.  It’s fair to say that people with money problems are in chaos. And for as bad as a chaotic life can be, chaos can also teach, if you let it. You see, the wind can both extinguish a fire and also increase it.

Oscar Wilde said, “One’s past is what one is. It is the only way by which people should be judged.” That quote may rub some the wrong way, but know this – I don’t know of anyone who minds being judged on their past as long as their proud of it. It’s when the past isn’t so pretty, that people become uncomfortable with being judged.

Which brings me to my point: one’s past is truly a neat little record of what one is, up to that point. You’ve heard the saying, “you are not your past”. That’s true, but only if your recent past is different from the distant past.  If a person is still managing their money as poorly yesterday as they did five years ago, they are their past.

Here’s the good news: Anyone can start creating a new financial past today. To do that, a person just needs to take stock (yes, judge) where things are today and also where they’ve been in the past.

In any case, quite apart from what either foolish people or wise people think, that person will be exalted. In other words, to be afraid of humbling yourself, to cringe at the idea of self-inspection, to have the attitude that it is the worst thing that you can imagine, is, financially speaking, insane—completely senseless.

To excuse yourself from introspection is one of the greatest follies imaginable; it is to reject the very idea of self-improvement. We should always seek the best; we ought to seek what is “first class,” and that is to evaluate ourselves, humble ourselves, and abase ourselves of our own volition. This is the greatest, most rewarding, and most effective thing that we can do in each situation, every moment of our lives.

There are, no doubt, many who are terrible with money in daily life but don’t acknowledge anything—they never accept that they’ve made mistakes. For such people it is a matter of course to defend themselves “tooth and nail.” They grasp at every straw in an attempt to defend themselves—they use everything that they can find. But know this – when they do that, they are not only explaining away their own freedom, they are working against their own freedom. As they say, if you argue for your limitations, guess what? You get to keep them.

To be clear, I’m not talking about a person who focuses on their own perceived disadvantages. Those people tend to stay stuck in their present state or condition. But when a man or woman takes an honest look at what is missing, they begin to come-up out of their circumstances and pursue a higher way of living.

The person who won’t recognize their current reality is destined to be in bondage to it. The person that decides that they will look inside themselves first will often find that the answers are not found in external relationships or situations, but in the disciplines of personal discovery and personal development that are missing in their lives today.

If you are feeling unsatisfied monetarily, or if you feel as though you are presently living beneath what you had intended for your life, I want to encourage you to take time for serious self-examination.

As you embark on this journey, here’s a suggestion – Be honest with yourself.  As noted physicist Richard Feynman said, “the first principle is that you must not fool yourself – and you are the easiest person to fool.”

Here are some questions that may help you as you begin to look inside:

What is missing in my financial picture?
What is my present attitude about money?
What limiting beliefs do I hold about wealth building that are causing me to be stuck?
What financial knowledge have I not yet obtained?
What changes do I need to make in order to unlock a better life?
What success principles have I not been living by or properly administering?
What do I know to do with money, but have not yet acted upon?
Am I judging myself on my intentions or my actions with money?


Remember, if you are the same person today as when you were the worst with money, you haven’t changed. And we know this about change – nothing changes unless something changes.

If you’ve made poor choices with money before, you may have been doing the best you could, based on where you were at that time. There is no reason to be ashamed of where you’ve been.

It’s only in releasing shame about the past that a person is able to be free in the present.

Choose today to do healthy self-inspection. Choose to validate yourself—who you are, who you’ve been, and most importantly, who you will be. 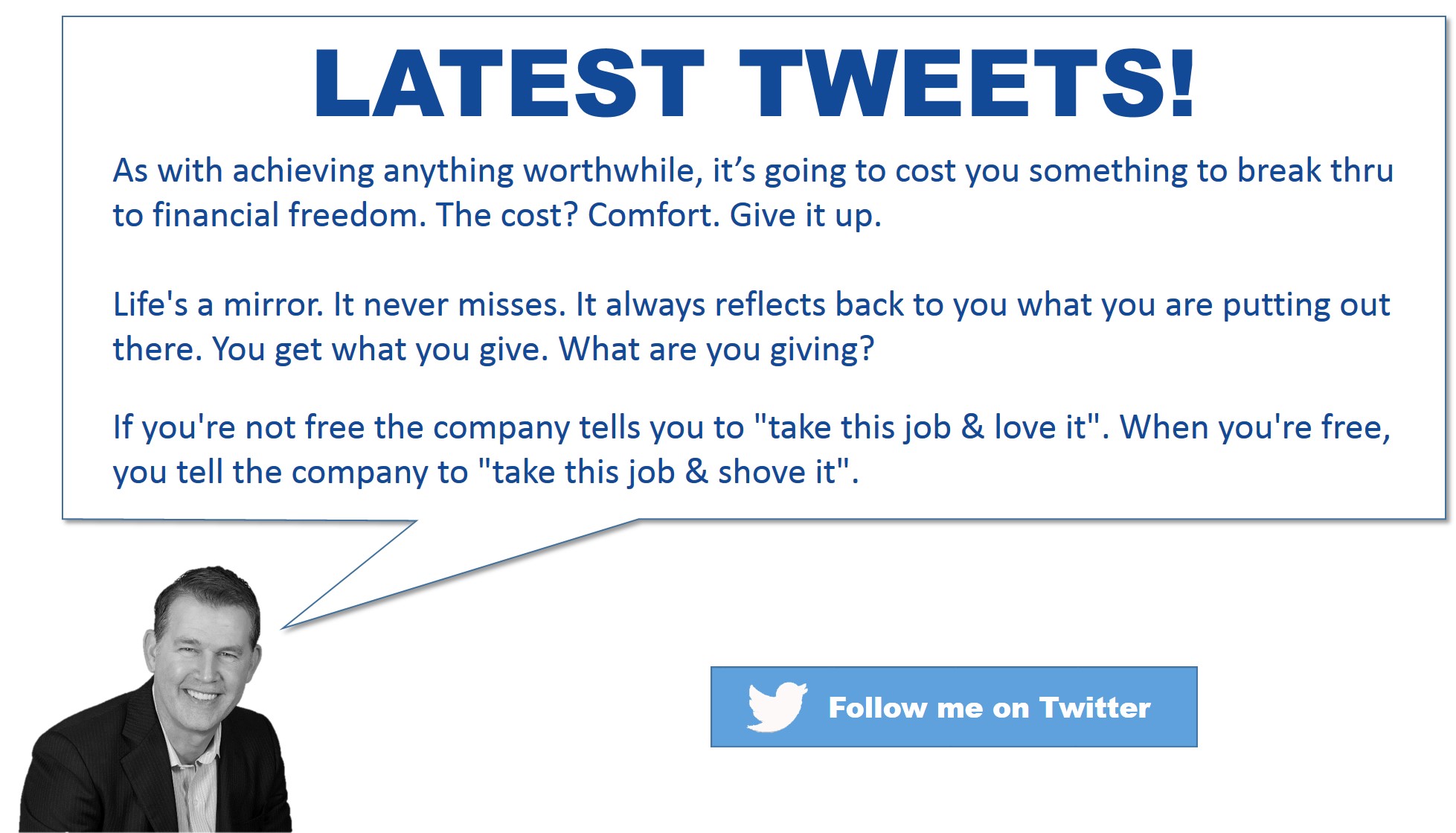 Thirteen Simple Thoughts That Changed My Life Forever. How Will They Change Your Life?

Your Brain Is Pre-Wired For Mediocrity. Here’s How To Fix That! Includes BONUS Podcast!

Will You Take The Financial Freedom Pledge? The Other Declaration Of Independence.