It’s no secret that I love to read. Books and articles about self-improvement, personal finance and investing are some of my favorite topics.

Recently, when scanning the financial headlines, one heading in particular jumped out at me. It read…

“A majority of Americans think children will be financially worse off than their parents, survey finds”.

Intrigued, I had to read it.

The article referenced a Pew Research survey that found more than two-thirds (68%) of U.S. respondents think today’s children will be financially worse off as adults than their parents, up from 60% in 2019. Only 32% think children will be better off. You can read the article here:

Some of the justifications for the respondent’s opinions were based on the current economic recession brought on by the pandemic and its impact on things like learning, future employment and the like.

The article included a rather interesting graph, depicting the percentage of children earning more than their parents, drastically falling over the decades from a high of 92% in the 40’s to about 50% in the 80’s.

But right after the graph, the main thrust of the article suddenly appeared…

A hit on what, you may ask?

On those who want to get ahead.

Right after the graph, these interesting words showed up…

The main reason for the decline is that income inequality dramatically increased over this time period, Grusky explained.

“If the benefits of economic growth had instead been broadly shared, then a large swath of children would be doing better than their parents,” he said.
In order to reverse the trend, that economic success has to reach everyone, he noted.

“It would solve the absolute mobility problem … and a great many other problems facing our country.”

Ah. The topic of income inequality and all its purported evils is alive and well!

If you listen to the talking heads, they’ll have you believing that income inequality is responsible for the majority of America’s woes and that if the rich would just give back to others what they’ve wrongfully taken, America would be better.

Pardon me while I have a deep belly laugh.

Friends, I want you to know that the facts.

The facts are that there’s plenty of money to go around. Someone getting rich doesn’t take away from someone else’s ability to also get rich. It’s not a zero sum game.

You see, there’s no shortage of money. Far from it. There’s just a shortage of people that will put in the time, effort and planning it takes to build wealth.

There are more millionaires being created today, and at a faster pace, that ever before in recorded history. Most of them are self-made, starting with next to nothing and building wealth for themselves. But here’s something else…at the same time, we are also creating more billionaires than ever before.

Nope. There’s plenty of money to go around.

But what about that graph Monty? Doesn’t it clearly show that children are earning less than their parents?

Yep. It absolutely does.

But what’s behind that trend is not some evil exploitation by the rich.

It’s also not that poverty is increasing. In fact, more households are earning over $100,000 than ever before.

The cause of that trend is that the middle class is continuing to shrink at an alarming rate. It’s vanishing before our eyes.

Decades ago, a middle class income could afford a rather comfortable lifestyle. A barber could buy a house, raise a family, send the kids to college and retire just on their salary.

The reason it’s gone is that we have fully transitioned from the industrial revolution to the information revolution. Our economy rewards knowledge and information much more than it does manual labor. So, if the barber’s son or daughter want to follow in their father’s footsteps, they can, but they’ll certainly earn less in today’s dollars.

That’s not a fault of our capitalist economy. Just a result of how it works.

And boy does it work…

American incomes – in inflation-adjusted terms – have more than tripled in my lifetime.

Both household income and household net wealth are currently at record levels.

We enjoy modern day luxuries, technologies and advances in healthcare that the Rockefellers could only dream of.

At the same time, roughly half of Americans own no stock, either directly or indirectly via retirement accounts such as 401(k)s. Many Americans blow their paychecks on material things in an attempt to look rich, but that actually make them less rich.

So, the income inequality problems in our society are not the result of evil rich people. They’re the result of individuals making poor choices.

I was set loose on the world in the early 90s. That’s when I graduated college and struck out on my own.

At that time, America was in yet another recession. Unemployment rose to nearly 8%, much higher than it is even now. There was a real estate collapse, rising taxes, and a war in the Middle East.

The country was still reeling from the savings and loan crises that saw over 3,000 financial institutions fail. That was on the heels of a major bust in the oil market and one of the worst meltdowns in stock market history (Black Monday).

So clearly, it was a terrible time to start building wealth right? (Sarcasm).

Quite the contrary. It was a great time to start building wealth and that’s exactly what I chose to do.

And you know what happened?

I built wealth. Lots of it.

That’s right. In the middle of all that bad economic news, I just put my head down and got to work.

And my advice for anyone wanting to become financially free is to do the same.

Don’t subscribe to the toxic philosophy that someone owes you something.

Ignore those who say that the “game” is rigged or fixed.

Reject the ideology of those who tell you that what others worked hard for and made sacrifices to obtain, must now be given to those who won’t do the same.

For when you do, you won’t need someone to rescue you. You’ll rescue yourself. 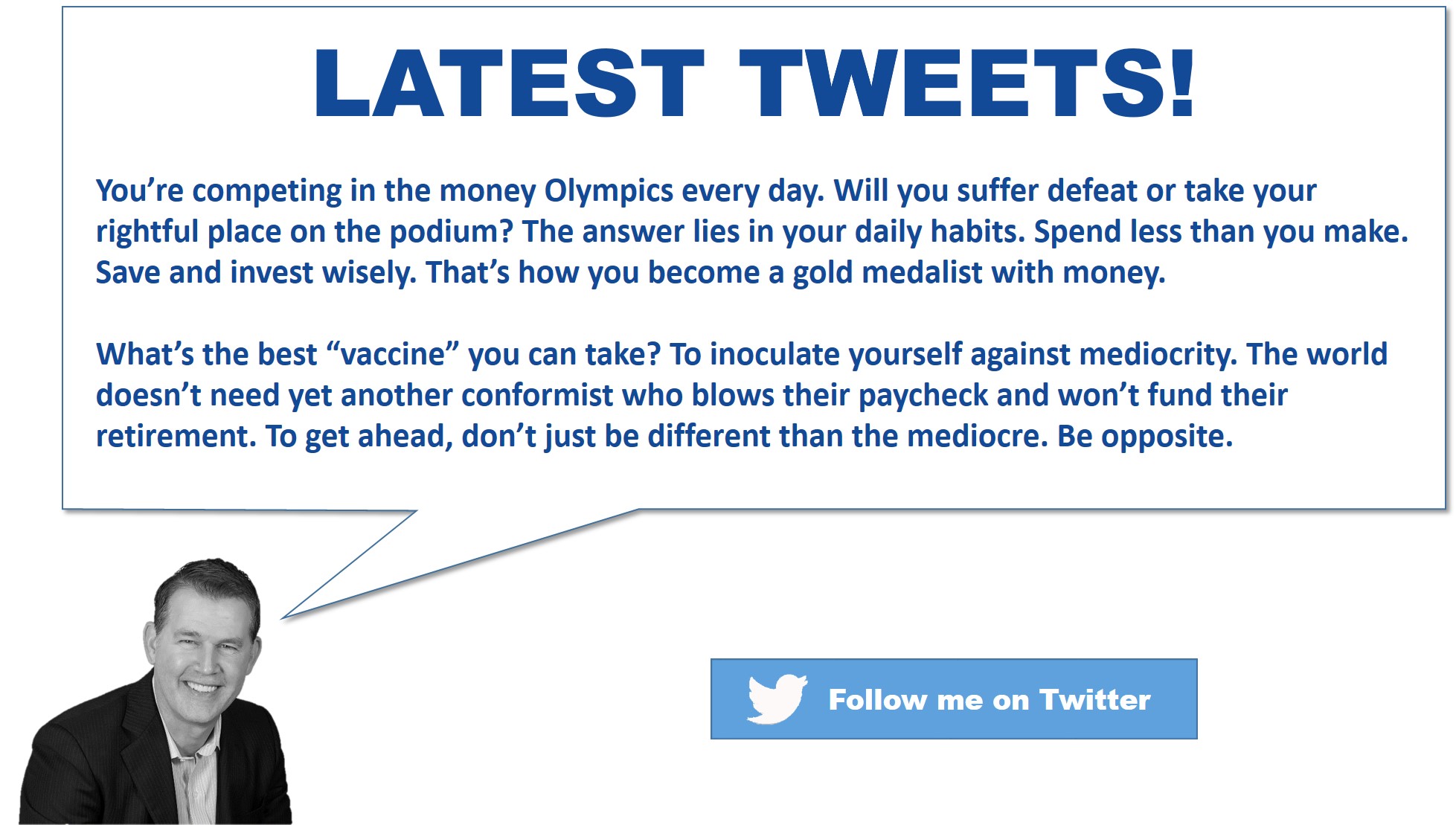 Why Do So Many Intelligent People Ignore This Super Simple Method To Becoming A Millionaire?

Where Will You Be This Time Next Year? If You’d Like To Know, Hop Aboard The Freedom Machine!

Many People Will Only Like You If You Fit Into Their Little Box. Be Sure To Disappoint Them!