Charles Earl Boles, also known as Black Bart, was an English-born outlaw noted for the poetic messages he left behind after a couple of his robberies. Often called “Charley” by his friends, he was considered a “gentleman bandit”, with a reputation for style and sophistication. He was one of the most notorious stagecoach robbers to operate in and around Northern California and southern Oregon during the 1870s and 1880s.

Ironically, Boles was afraid of horses and made all of his robberies on foot. Together with his poems, this earned him notoriety. As did something else…

He supposedly never once fired a weapon during his years as an outlaw.

That’s right, he robbed innocent people of their money, their possessions and their futures without ever firing a shot. A bloodless robbery.

And today, it’s as if the spirit of old Black Bart lives on.

So many people today are getting totally robbed of their money and their futures…without a shot ever being fired.

They’re quickly handing over their lives to an unarmed assassin. Giving up their futures to a ghost killer. To a “gentleman bandit”.

It’s no other than… (misguided) fear.

Fear of actually being wrong.

Now, here’s what’s interesting about fear. If you were like most kids, you couldn’t wait to crawl.

Even though your little arms weren’t strong enough to hold you at first and you fell on your face, you kept trying. You had no fear.

And soon you couldn’t wait to walk, to talk, and to drive.

It didn’t matter what the results were in those first attempts; you just kept on trying no matter what.

You stood up, took those first steps. Fell. Hurt yourself. Perhaps even wrecked your parent’s car! Maybe cried for a minute or two, and then you did something magical – you tried again. And again. Until you had it.

Giving up never crossed you mind.

But something else did.

It was always there. But back then, you just pushed it aside.

You weren’t going to let an unarmed bandit keep you from doing what you must do.

Does fear keep you from starting? Does it hold you back? Do you avoid doing what you know needs doing, to keep from falling on your face?

If so, here’s an important message…

Yep, avoiding failure is not innate. It’s something that is learned.

Somewhere along the way, many learned to become afraid to fail. Perhaps from parents or from peers. Or just from society has a whole.

And society can be a swift and brutal teacher.

But it’s also a horrible teacher. If it were a real teacher it would be fired for teaching false principles.

Because it teaches this…

That it’s embarrassing to fail and that others might hold it against us or make fun of us for it. Nobody likes a loser, so it’s best to play it safe and stick to what you’re already good at, so goes the mediocre’s thinking.

Given that, many never start that business that could bring them untold riches. They never set a goal to be wealthy and financially free. They never invest. Heck, they never even buy those books on success and self-improvement that have helped so many to succeed. I mean, imagine the horror if someone they know catches them with a book like that and states that refrain that is all too common to the mediocre – “What are you reading that for? You’re going to be rich? Yeah, right! It’ll never happen!”

Which brings me to the point of today’s essay, and my personal perspective, about fear of failure.

In my opinion, the fear of failure is a manifestation of…

Associating with the wrong people.

Will Rogers made that famous quote, “Too many people spend money they haven’t earned, to buy things they don’t want, to impress people that they don’t like.”

Similarly, I see too many people currying favor and seeking affirmation from people they don’t even like, such as…

Society’s knuckleheads who have an “expert” opinion on everything, yet have only expertly guided themselves into debt and hardship.

And this is why fear of failure is so ironic…

I once gave advice to a gentleman who had done a terrible job with his money. Naturally, he thought the best thing he could do at the moment was to buy a new car. I told him he should just keep driving his older car and put the money he was going to spend on the new car into investment.

“What if I pull into park at a grocery store or somewhere in that old car and the person parked next to me looks at me jeeringly for driving such an old car!?!”

This person was so concerned about what a complete stranger (and one who probably had financial problems of their own) might think of him, that he avoided the very actions that would bring about actual success, instead of the fleeting perception of success. Is it any wonder why he has money problems?

Friends, inspect your fear of failure and of mistakes and identify its root cause. If you’re afraid to fail in front of your peers, I’ve got news for you – you need new peers.

I’m blessed to have a close knit group of very successful friends. We encourage each other. We challenge each other. We support each other. We know that temporary setbacks and mistakes are just part of the journey with success. We all know it comes with the territory. It’s a part of growth.

Similarly, you will benefit and grow from having the right people challenge you. In some cases, you’ll learn something to help you improve. In others, you’ll gain confidence in what you already think.

Conversely, if you need others to agree with you and cannot bear the idea of temporarily failing in front of a bunch of failures, know this – you will become them. In other words, how do you think those people wound up with such botched lives? Answer: Avoiding actions that would haven taken them to success, stemming from their own fear of failure.

The people who you associate with are either vitamins are poisons. The best bring out the best in you. And the worst? They try to convince you that your worst is your best.  A recipe for true failure.

Friends, don’t let poison people rob you of your dreams. Don’t let them create an environment where you’re afraid to fail. You’ll  just become a victim of another bloodless robbery, no different than Black Bart’s victims.

A better life is calling for you.

The world is calling for you.

Your calling is calling for you!

Don’t let these calls go to voicemail because you’re too afraid to pick up the phone.

Everyone is a little afraid to start something new. To change their belief system. To go against the grain. This is all normal. Yes, fear is normal.

But be sure to have the right type of fear.

Not fear of failure. Or fear of mistakes, fear of risk, fear of embarrassment, fear of how others perceive you, or fear of being wrong. Those fears are what haunt the mediocre minds.

Rather, have better fears. Such as…

The fear not living up to your full potential.

The fear not leaving a legacy.

The fear not living your life’s purpose.

Don’t let the wrong fear rob you of your life’s dreams. Are you fearful of the right things? 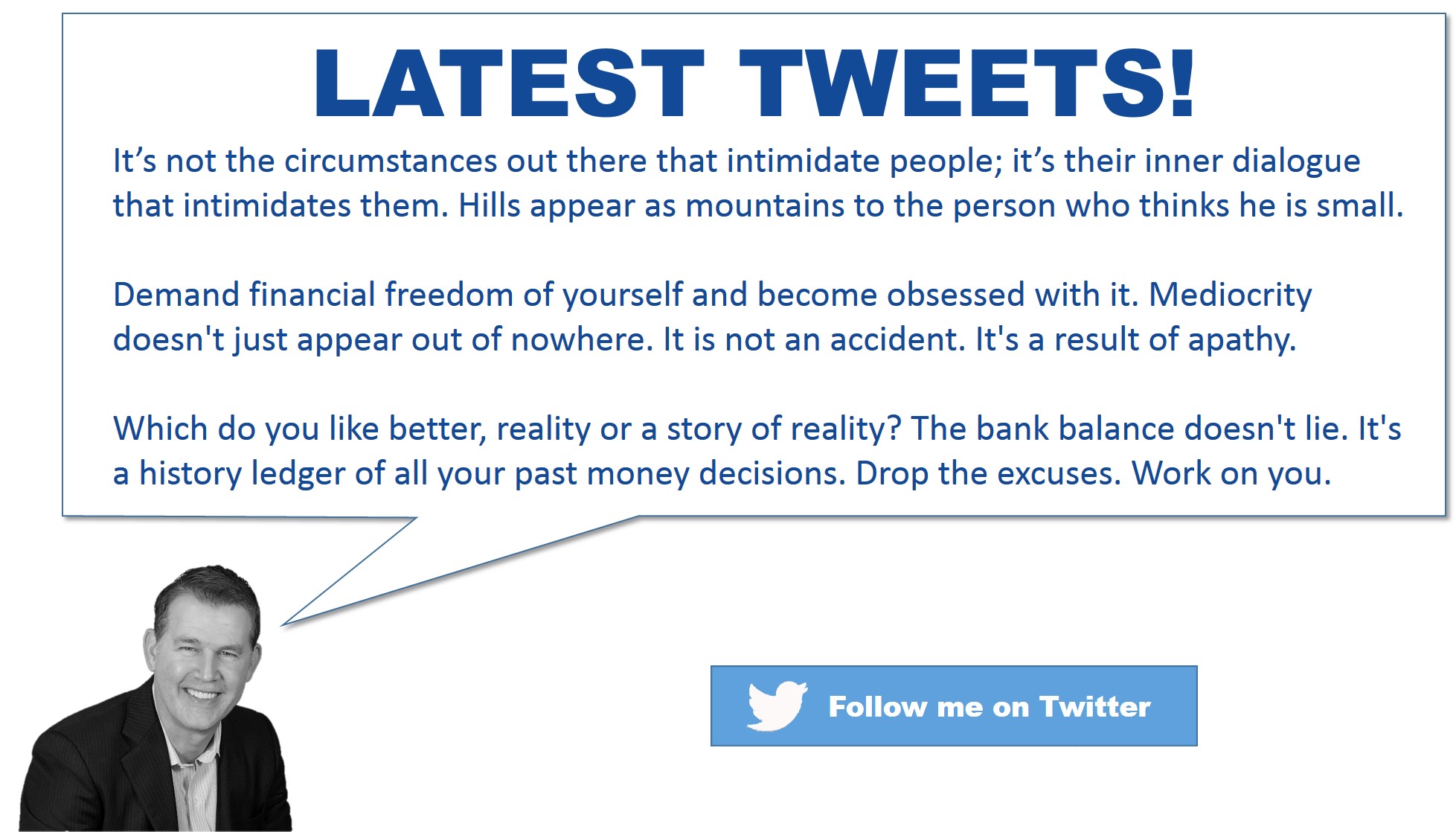 The Big Divorce. If You’re Not Making Enough Progress, It Might Be Time To Breakup With…

How I Invest: The Very First Thing That I Look For In Every Single Investment Opportunity

A Wasted Life: Most People List This As Their Biggest Regret In Life. Here’s How To Avoid It.