A quick note before getting to this week’s article…

Just three weeks ago, I wrote an article about how to avoid becoming a victim of financial fraud and scams. You can read it here. And just a few weeks before that, I wrote another article stressing that integrity is a person’s most valuable asset. You can read that article here.

The timing of those articles was certainly random, but due to the startling news that came out of the financial sector on Thursday, I wanted to mention them once again.

On Thursday, Martin Shkreli was arrested following a federal indictment by the FBI after an investigation into his tenure at a hedge fun he ran several years ago. He has been accused of running a Ponzi scheme and has been charged with both securities and wire fraud.

To add more context, just three years ago Forbes magazine named him to its list of “30 under 30 in Finance”. Earlier this month, Business Insider ran a piece praising him. In fact, some people were even calling him a genius.

Mr. Shkreli deserves his day in court and is to be presumed innocent until proven guilty. However, I want to remind my dear readers again to be careful with your money and state that age-old axiom – if it’s too good to be true, it probably is. Before investing your hard-earned money into something, do your homework. Also, use your intuition and gut and stay away from anything that gives you concern. Some of the smartest moves you can make with money is to do absolutely nothing. Be safe!

The Dow finished down by nearly 370 points Friday, to close out an historic week in which the Federal Reserve raised interest rates for the first time in nearly 10 years.

So far in December, the Dow has clocked 12 volatile days with swings of either up 100 points or down by that same amount. That’s the most days with moves of that magnitude in a month of December, since the heady days of 2008!

But that’s nothing compared to what happened this past summer…

In mid-July, the Dow Jones Industrial Average was over 18,000. By the end of August, it had collapsed down to 15,000 and change. Investors fretted over things like a possible Chinese slowdown, a crash in commodity markets, whether or not the Federal Reserve would hike interest rates, and a plunge in oil prices.

No, This Time Is Not Different

As a result of all this, many short-term investors ran for the exits, selling their stocks in the process. They became rattled as the market gyrated wildly….once again. It was as if they had never seen volatility in the stock market before. Many even started bellowing the oft-repeated nonsense in times of market volatility – “this time it’s different!” It wasn’t different, as the market rebounded shortly thereafter.

Which leads me to this newsflash…

Yet, so many “investors” do the complete opposite of what they should do during all of this volatility. You see, most people who call themselves “investors” really aren’t.

The average “investor” is really a speculator. He buys a stock with the hope that at some point in the future, he’ll find someone who’ll buy it for more than he paid. He’s trying to time the market. “Buy low and sell high,” right?

Volatility Does Not Equate To Risk

More often, however, these same people can’t stand the uncertainty and volatility of the market. Watching the market flip and flop all over the place leads them to make bad decisions. Instead of buying low and selling high, they do the opposite. Ouch.

And they do this because they commit one of the cardinal sins of intelligent investing – equating volatility to risk, to something bad. Something very bad.

Simply put, volatility is neither bad or good. It’s just a measurement of how prices are moving, regardless of direction. Let me repeat that last part – regardless of direction. I see more people get freaked-out over a 10% drop in prices and yet are elated when they see a 10% increase in prices. Guess what? Both the 10% drop and the 10% increase are examples of volatility! So, if you love it when your favorite stock rises 10% on a given day, now you can say that you love volatility!

Let me put stock market volatility and risk into perspective… 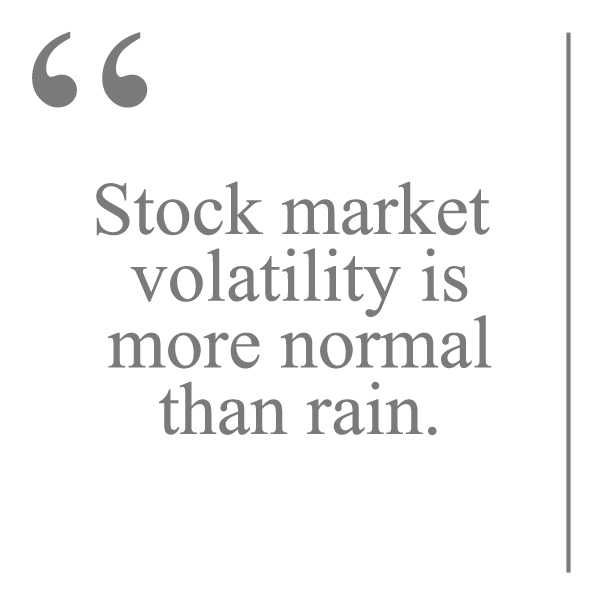 The historic measure of the market’s volatility (standard deviation) is around 19%. That includes such events as the Great Depression, two World Wars, countless recessions and bear markets, a nuclear emergency, dozens of interest rate hikes and cuts and also the wild gyrations of the Great Recession of just a few years ago.

Over the short run, volatility does indeed spike. But in the long-term it tends to smooth-out and return to that historical average.

But even in the short-term, big volatility does not equate to falling stock prices.

During the Great Recession, which year do you think was the most volatile? You’d be correct if you said 2009. The standard deviation in 2009 was 21.3%, clearly more volatile than the average. But what happened to stock prices during that oh-so-volatile year? The stock market was… (wait for it) UP an incredible 26.5%. You see, stock market volatility does not equal risk.

The reason I make this point, is that the long-term investor would be wise to keep sudden, short-term, market swings into perspective for these reasons:

1. Volatility can make an “ass” out of you. By “ass” I primarily mean a person who adopts a herd mentality, much like a herd of donkeys. Following the herd causes investors to think irrationally and to sell when the market is low. All the commotion from the herd is hard to ignore. After all, we tend to ignore the calm but get super excited by the hurricane. As legendary investor John Bogle says, “Don’t pay a lot of attention to the volatility in the market place. All these noises and jumping up and down along the way are really just emotions that confuse you.” The question shouldn’t be “Will my investments go up or down?” — because of course they will. The better, more intelligent, question you should ask is, “Will the fact that my investments go up and down bother me enough to do something dumb?”

2. Some of the best times to buy are when it’s most volatile. Investors who were able to keep a cool head, and recognize that stock prices were “on sale” during recent stock market swings could have bought quality stocks at a bargain. Remember, just as you enjoy your favorite gadget or shoes going on sale, so must you think of stocks in the same way. A lower price on a quality stock is your friend, not your enemy. That can be tough advice for investors to follow on a day when the Dow Jones Industrial Average falls more than 1,000 points at the opening bell (as it did back in August). Still, panicked, knee-jerk selling is one of the biggest mistakes that retail investors can make. In the stock market, much like in real estate, you get rich when you buy. Indeed, I’ve made millions in the stock market due to my willingness to buy at the right times, when everyone else was selling. That’s not a statement of arrogance, just one of fact. “Be fearful when others are greedy and greedy when others are fearful”, is as true today as when it was uttered by the greatest investor in the world years ago.

What I want to leave you with in this article is this idea – volatility is not a proxy for risk. Although this is a common idea preached by the “experts” and certainly the doomsayers, it’s just wrong. Dead wrong. Warren Buffett has said, “Volatility is far from synonymous with risk, and equating the two terms leads the everyday investor astray.”

Remember, volatility is a way of life when you’re investing in stocks. Just because it hasn’t been there much in the last two or three years doesn’t mean it’s gone away. There will be more volatile times in the days ahead; you can count on that! And in volatile times, it’s important to remember that your investments are designed to carry you through decades, not days. It’s important to stay focused on the long-term.

We are still here, with markets at record highs.

Although the financial markets of 2008 were the closest thing to a real collapse the world has ever seen….

In summary, the media loves to hype market fluctuations as if they’re big news, but the truth is that they’re ordinary events. Just like the economy goes up and down over time, the stock market does the same thing. It’s all normal. The media reports on this stuff because it’s something to breathlessly talk about, even though it’s as normal as the changing of the seasons. Don’t waste your time listening to their hype and getting yourself all worked up.

Make your investment decisions based on logic and your homework, not on what everyone else is doing. You’ll be glad you did.

Want even more wealth-building information? Check-out these other articles from the blog archives:

Having Difficulty Staying Positive After A Setback? Use The “Ledger System” To Bounce Back!

If Your Money Could Talk, What Would It Say?