And we know this about anger – behind every instance of it lies….fear.

What are Americans afraid of?

They’re afraid that the divide they see between the wealthy and not wealthy is… permanent.

And they are right.

For decades upon decades, America’s middle class grew and grew. A middle class living meant rising wages, funds for your children’s college education and enough left over to put away for a retirement nest egg. Times were so good, it was a practically a given that children would end up better financially than their parents.

Those good times brought about significant advances in technology and innovation that improved everyone’s lives. Today, we live much better, easier, healthier and more convenient lives than any of the richest people in the world could have imagined just a century ago.

But starting in the mid-eighties a silent change started to occur. Like tectonic plates shifting unnoticeable under the surface, America’s finances were shifting. Wages in the middle class slowed and then flattened as the Technology Revolution made many middle class jobs obsolete or financially menial. Long the stalwart of middle class economy, the number of blue collar jobs shrunk, giving way to specialization and the Information Age.

Most in the middle class were so used to the near automatic improvement in their lives and their family’s lives each year, they never saw it coming. Many are still in denial.

But the facts don’t lie:

Where did they go? Into the category that grew by almost the same percentage – the lower income class.

Each day, people are literally falling out of the middle class. They’re dropping out. They pie is shrinking. They’re being forced out. It’s the largest financial exodus of its kind.

Have you noticed that when people have something serious to say, they often precede it with…”I’m not trying to alarm you, but…”.

I mean to alarm!

You see, what’s harming Americans is not the state of inequality. That’s just a boogeyman that the middle class invented to mask the real problem.

Complacency is the silent killer.

And it’s one of those situations many believe will never happen to them.

For those of you who remember, in the early days of mobile telephones, Nokia was the brand to beat. The main advantage of their phone was ease of usability – in the days when everything was menu driven, their ease of use beat everyone else hands down.

But then they stumbled. And lost share. And fell behind.

During the press conference to announce Nokia’s smartphone division being acquired by Microsoft in 2013, Nokia CEO Stephen Elop ended his speech saying this:

“We didn’t do anything wrong, but somehow, we lost”.

There are lots of theories about what happened to Nokia but one theme that has appeared often is that their market dominance appeared to give rise to a degree of arrogance. And we know what arrogance can give birth to – complacency.

So many take the financial future for granted. Some folks become complacent and just coast. They fool themselves into believing that their state of being comfortable can’t be lost. They reason that they came from a middle class family, so the future will somehow be alright. They go to church, pay their taxes and keep their lawns mowed. How could anything go wrong to good people who haven’t done anything wrong?

There is a personal lesson here. Complacency affects individuals as much as organizations. If you keep doing what you have always done, you’re going to get less than what you’ve always received. Here me on this. I didn’t see you’ll get the same. You’ll get less. Our economy is way different than it was in the past. It rewards doers and thinkers. It punishes those who want to coast.

Don’t let your guard down. Give yourself a kick in the butt if you have to.

If you’re in the middle class and are not fed up with that fact, find out why. Nobody has anything on you. Wealth is the great equalizer. If you’ll work for it, it will transcend you. Whining won’t. Excuse making won’t and scapegoating surely won’t.

Stay grounded. Remember the feelings you had when you were a child. What was it that you were going to do? Sail the world. Explore. Be rich.

Create stretch goals for yourself financially. Push your limits. Set ambitious goals. Challenge yourself to do better and to be better. The fact is, if you want to spend your life coasting, you will – all downhill.

Don’t be a know-it-all. Know what you know and what you don’t know. It’s strength, not weakness, to seek advice from others. Success leaves tracks. Follow them.

Welcome fresh ideas. Invite fresh new thinking that challenges your perspective. The truth is, surrounding yourself with people that don’t stretch you is like talking to yourself. Rather than spend your time with the naysayers who want to brush the pet excuse of inequality, go learn from the best. Never stop growing.

Compete with yourself. View success as a journey rather than as a destination. Focus on beating your best rather than anyone else out there. That way you’ll always be growing and learning from the best in the field — yourself.

If you’re not getting ahead, you’re getting behind. Don’t be complacent. Don’t drop out of the middle class. Drop in on the wealthy class. 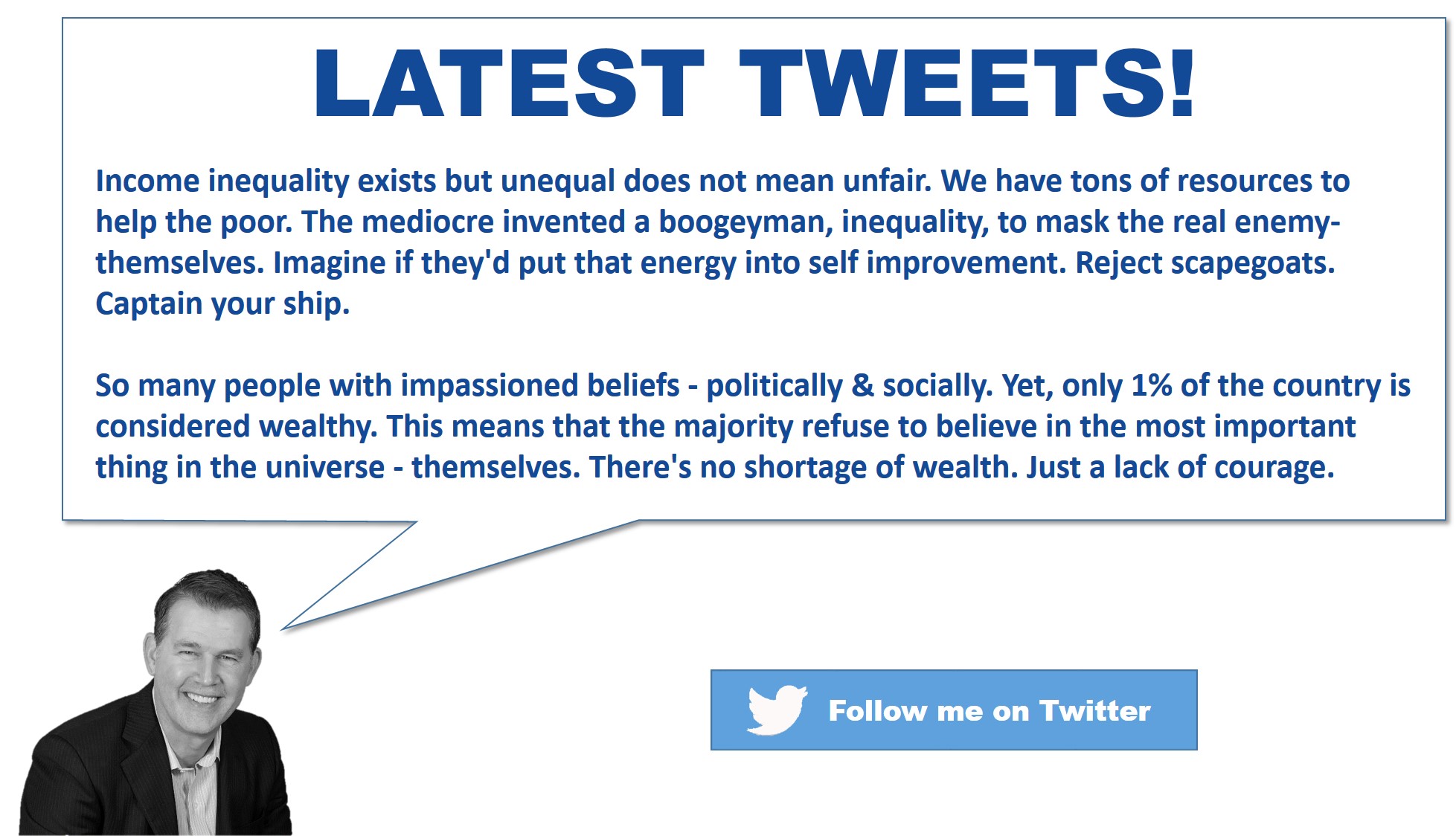 Wouldn’t It Be Great To Know When You’re About To Make A Big Financial Mistake? Now You Do…

WARNING: This May Make You Fall Asleep. Yes, Here’s The Least Interesting Way To Get Rich!

The Unfulfilled Life: If You Haven’t Figured It Out Yet, A Job Is Not The Answer. What Is? It’s This…