Is it possible to have too much optimism. In short, no.

However, it is possible to have the wrong type of optimism. While negativity and pessimism are mental diseases, blind optimism and “happy talk” optimism lead countless people over financial cliffs.

When people who are in financial dire straits come to me for advice, the conversation eventually gets to how much money they owe on their credit cards. In all the years that I’ve been giving advice, not one of these people have ever told me that they have a reasonable amount of debt on their credit cards – $500, $1,000, maybe $2,500.

“Why did you let the amount get so big before seeking help?”

To which the reply is always the same…

“I thought I had things under control.”

“What made you think you had things under control?”, I always ask.

The answers to this question are always the same…

“I knew that I was starting to get in financial trouble, but I thought the following would happen:

-I would get that big commission check that I was expecting at work.

-My wife would get that job she’s interviewed for and start bringing in a second income.

-We would win the lottery.

-We would sell the house and make a big profit.

-My dog would learn a cool trick and I’d put him on TV and make millions.

-The economy would get better and I’d have a better paying job by now.

My reply is always the same in these cases…

“I see. You thought you had things under control because you had a magic plan.”

“A what?” comes the reply back.

“A magic plan. A plan whereby you rely on a fairytale perspective of everything going perfectly right and nothing going wrong”, I reply.

Not All Optimism Is Created Equal

There’s a big difference between realistic optimism and blind optimism. It’s important to know the difference. In the blind optimism scenario, a person has the tendency to focus on the positive aspects of a plan or situation, but he is virtually “blind” to any potential pitfalls.

So, back to the people seeking advice…what went wrong?

Bob called and said it would be another 6 months before he could pay them back, if ever. The customer let them know that they’re choosing another vendor. The wife didn’t get the job and the dog just sleeps all day.

On top of that, life happened. The dishwasher broke and their mother-in-law who is on a fixed budget now has a roof leak. The main car started leaking transmission fluid and the dentist says that their kid needs braces.

So, instead of avoiding the financial cliff, they’re hurled over it with expected gains that didn’t occur and new expenses that did. What was going to be close call has now got them $5,000 in credit card debt.

The property tax bill comes due. It’s the holidays now and there’s Christmas gifts to buy. On top of that, they lose their job due to an unexpected downturn in the economy. Now the credit card debt mushrooms to $20,000 and there’s no end in sight. More expenses, more surprises and a long period of being unemployed, balloon their credit card debt to over $40,000.

I realize that this is some gloomy stuff, especially if you’re reading this essay with your morning cup of coffee. But this is reality. Nobody wakes up and suddenly finds themselves with a large credit card bill. The genesis of these predicaments is almost always a magic plan. Blind optimism.

And look, there’s a reason so many create magic plans…

It’s because they took a look at the hard work and sacrifices that would be needed to truly avoid the financial cliff they’re facing and they decide to reject it.

Magic plans and blind optimism are a manifestation of someone who has disdain for reality. They peer into the chasm and what do they see? Work, hard work ahead that will be necessary to get themselves out of the mess they’ve created. So, they get busy rejecting reality and come up with an alternative reality. After all, it’s a lot easier to dream of winning the lottery than it is to get a second job and to cut back on expenses in a big way.

Friends, blind optimism is self-deception. People who only have a rosy outlook, even when confronted with plenty of legitimate reasons to get serious about their finances, are essentially encouraging themselves to be intellectually dishonest. They’ve ignored the real world for years, and now they’re faced with paying the price.

Optimism is a wonderful thing. In the face of adversity, a positive outlook gives us the strength to fight the good fight. But it’s one thing to face challenges with the right attitude and another to ignore the facts and live in a fantasy world.

If you see a financial cliff on the horizon, the time to act with determined optimism is now. Yes, build a plan but don’t build a fantasy plan. Search for evidence that contradicts what you would like to happen and build contingency plans for what could happen.

Just as you can’t control the sail if it’s not attached to the boat, you cannot control your life if your actions are not attached to reality. Much better, then, to have a kind of optimism that can admit when there’s a problem without deceiving yourself. In other words, it’s not the rose-colored glasses that people in financial troubles need, but the magnifying glass.

If you find yourself shying away from the work and sacrifices needed to get out of a financial mess, check yourself and your intentions. Are you looking for a way to make things right or just to make things go away?

While there are many things that seem to make up the difference between the successful and unsuccessful, I’ve noticed one simple difference that stands out the most –  a willingness to face reality.

Successful people are willing to do the things that others are not willing to do. The old saying, “It will work itself out” is one of the biggest loads of horse manure I have ever heard. You can see this everywhere in how people live their lives and make choices based on what “feels good” and they never truly get the life they want.

Engage actively in your financial life. Be optimistic yes, but not because of some miracle happy juice but because you have a grounded plan to achieve financial independence and one where you are truly in control. 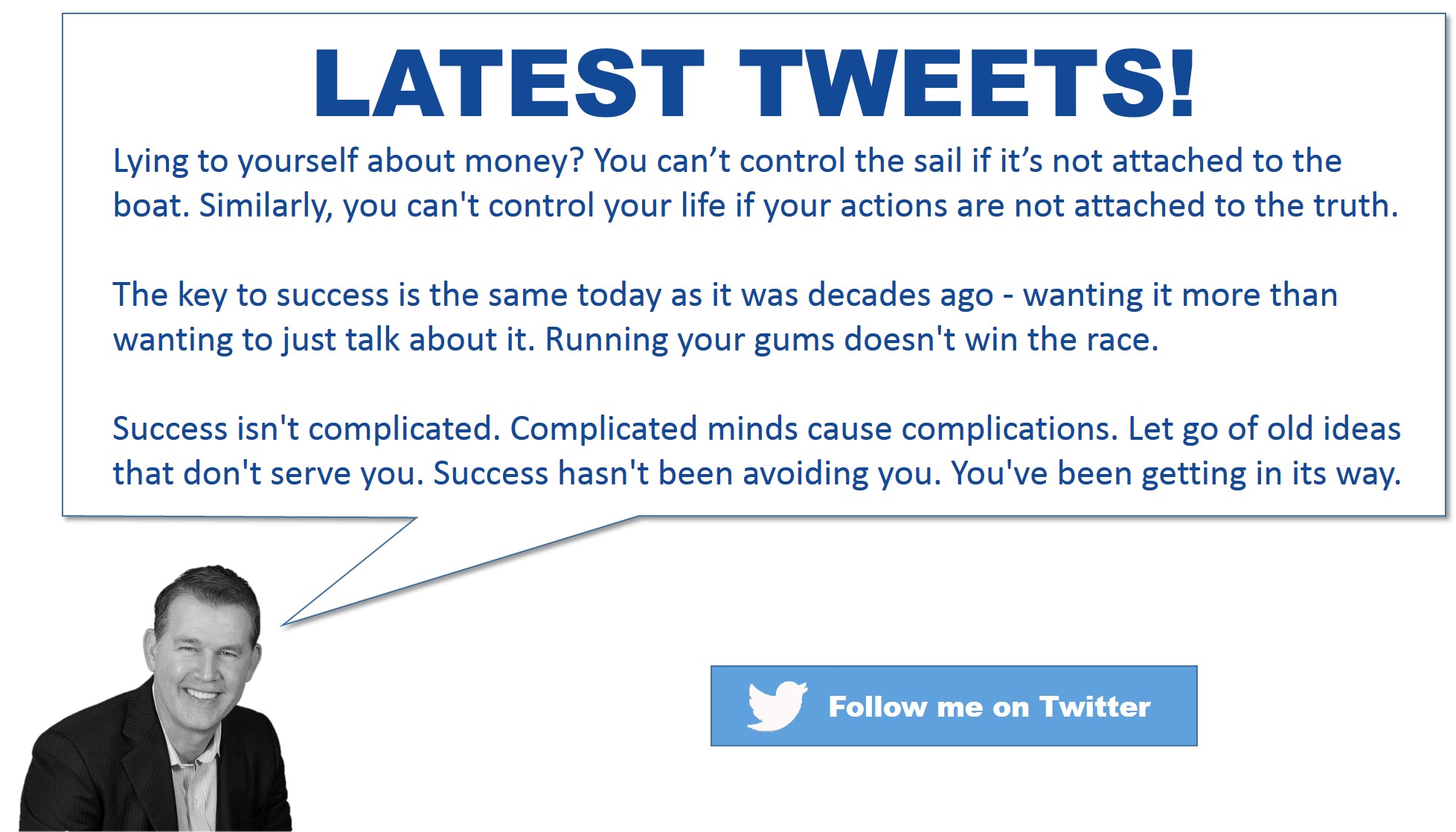