I wish I had a crystal ball.

Not for predicting the stock market.

Not for building my March madness bracket.

Not for predicting the weather.

I’d use it for this…

…to show people their future.

And what would that future be?

Well, for about 99% of the people in this country, that future will be this – becoming stuck in the middle class.

I don’t need a crystal ball to demonstrate this. It would just be for effect. The brutal truth is that the numbers are in plain sight. The sobering statistics show the vast majority of people in this country will muddle thru life.

Because they follow the “pattern”.  Here’s the typical financial pattern of most Americans, post-college:

During their 20s, they don’t make much money. Careers are being started and there’s already a sizeable amount of debt that’s been built up. Almost every penny of what they make is spent on necessities such as food and rent. Saving money is almost laughable, they think, so they forgo it. In doing so, they learn a terrible habit that will haunt them for years – financial procrastination. “I’ll get to saving when I’m in my 30s and making more money. I have plenty of time”, is their mantra.

During their 30s, their income increases. They start moving-up the career ladder and their income reflects that upward mobility. But this is also when many start a family. Just about the time they’ve paid off their debt from college, new expenses appear. There’s a house to buy since they’ve outgrown the apartment. There are more mouths to feed and clothe. They manage to save a little, but not nearly as much as they thought they would at this stage in their life. In doing so, they reinforce the terrible habit they learned in their 20s. “We’ll get to saving when we are in our 40s and the kids are out of college. We have plenty of time”, becomes their updated mantra.

Now come their 40s and 50s. Their income is higher than it ever has been. The kids are on their own.  For once, they actually have discretionary money to put aside for the future, but the hangover of years of austerity haunt them. “Let’s live a little, we deserve it”, they say as they buy new cars, designer clothes, go on exotic vacations and buy that vacation house by the ocean. “There’s no need to save. We’ll make a killing when we sell our house. We have plenty of time”, becomes their updated mantra.

In their later 50s and early 60s, their income levels-off or even disappear. Layoffs, downsizing, rightsizing, and corporate restructuring hits one or both of them. For the first time in decades, they’re back in the job market looking to start a new career. Unemployment lingers for months, if not years, as they face the consequences that their once current skills are out of date. To make ends meet, they dip into their meager retirement funds. They finally land jobs, but they pay a fraction of what they used to earn. The time without an income has taken its toll – they had to sell the beach house during a recession and at a loss, as they scrambled to get income. They also took out a second mortgage on their primary home to help cover some unexpected medical bills and replace their aging vehicles.

Finally, sometime in their mid to late 60s, they come to a sober realization – they don’t have enough money to retire on. The past 40 years went by like a blur. All those statements of “later” are now upon them. What was supposed to be their golden years, filled with travel and leisure, are now depressing days of waiting on Social Security checks to arrive in the mail and trying to make ends meet.

Friends, you may not like what you just read. And some of you may even go into denial about what I’ve written here, thinking something like this could never happen to you.

But here’s the truth…it most likely will.

If you think this sad story is rare, I encourage you to speak to family members in their sixties that are struggling financially. Have them read this and offer their opinion. You’re sure to see a lot of head nodding and expressions of acknowledgement, as they notice themselves in those passages. They will see themselves in “the pattern”.

Which is why I wrote this essay – so that you don’t fall into it.

I don’t know where you are in life – 20s, 30s, 40s or older. But I do know one thing – that “someday” is a crowded day. It’s filled with people that put off saving and investing. It’s crammed with those that couldn’t be bothered with building their retirement nest egg years ago. It reeks with the stench of regret and disappointment. And if you don’t take proactive measures to fund your retirement today, you too will be among the masses of “someday”.

You might think I’m going to end this article with clever tips on how to save money, like skipping a latte a day. I’m not. I personally think grown men and women know where they waste money. And that’s just it…

The men and women who have achieved financial success did so by making it their duty. They knew that the words of “someday” and “later” are the language of financial losers, so they exorcised them from their vocabulary. Instead of finding excuses not to save and invest, they found ways to do both. Yes, it meant sacrifice. Yes, it meant being uncomfortable at times. But yes, hell yes, it meant that they would escape “the pattern” and go on to live financially free lives.

And that’s the question for you, dear reader, today – Will you break out of “the pattern”? Will you have the courage and conviction to do what it takes to get ahead? Will you make funding your retirement your duty? Will you make it your obligation to yourself and your family?

If the answer is “yes” to the above questions, then you’ll escape the indignation of being in the “someday” crowd. You’ll not bow your head with regret in your later years. You’ll lift it up high because you’ll be living the good life. The financially free life.

There are the haves and the have nots in this country, precisely because there are the wills and will nots. Will you? 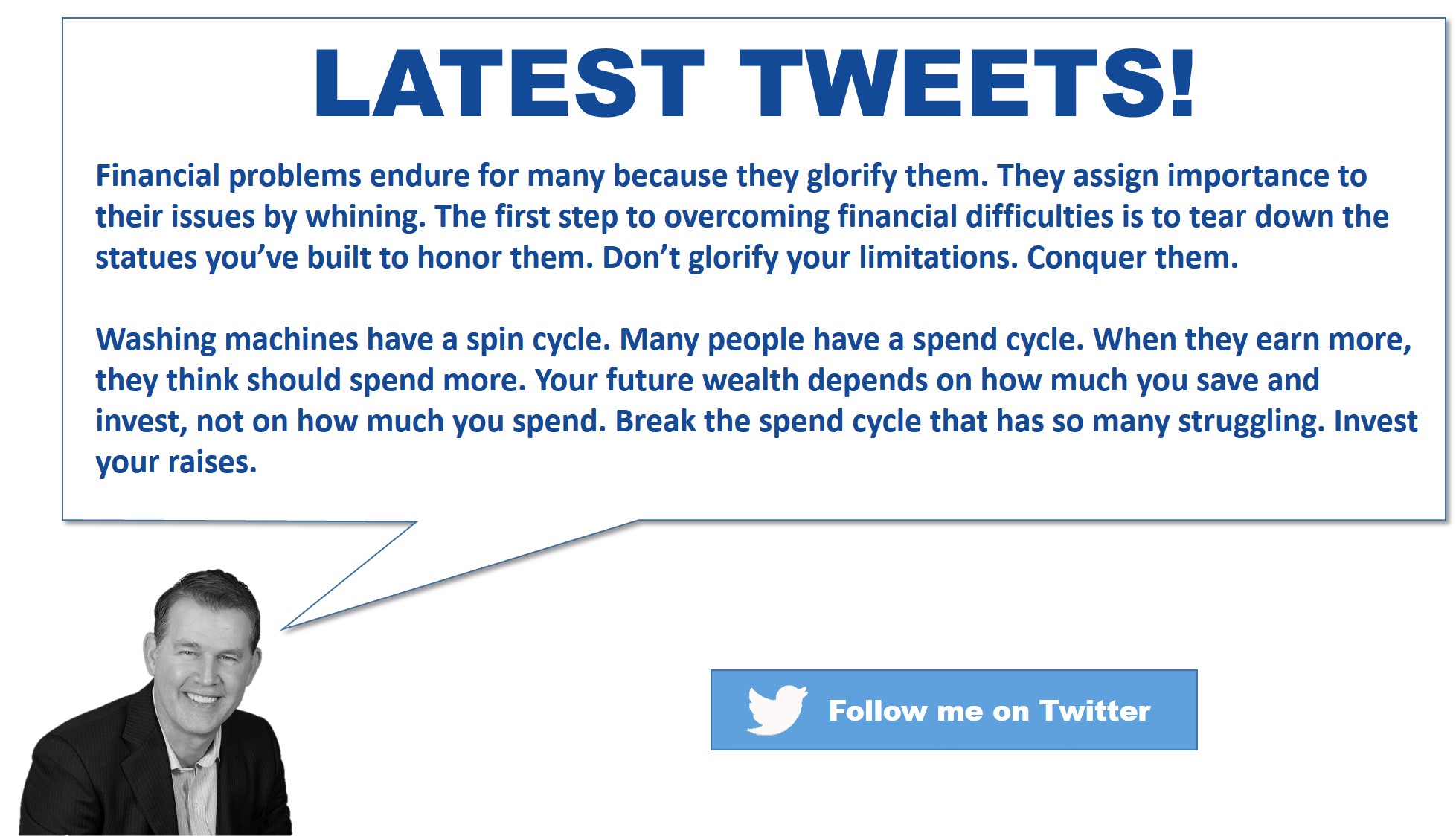 Expenses Are Still Not The Source Of Money Problems. It Always Has Been, And Will Be, This..