Whenever I meet someone for the first time, the inevitable question comes up…what do you do?

To which I reply, “I’m retired. I retired early and now I author a blog about achieving financial freedom.”

The replies I get back are usually something along the lines of – “Wow, that’s awesome! Tell me how you did it.”

But occasionally I get a boneheaded response. Such as one of these…

“I could never retire early. I would be so bored!”

To which I reply, “Riiiight!”

Friends, when someone tells you something about success that makes absolutely no sense, it’s usually because they are lying, lying to themselves and to you, to cover-up for a lack of success.

The tortured truth behind these statements is that they can’t retire. They don’t have enough money. They don’t have the resources. They didn’t save and invest and therefore they still have to work. The knuckleheaded statements above are just a smokescreen. They are a painful way for these people to excuse-away their lack of planning and their feelings of being stuck.

Now, to be clear, I’m not making fun of those who can’t retire early or on-time. Also, I certainly understand that there can be fulfillment from a job or running a business. The point of today’s essay is not to ridicule anyone, especially those honestly working to become financially free. The point of today’s essay is about intellectual integrity.

You see, the only person the people who make the statements above are fooling, are themselves. When you try to cover-up a shortcoming, it’s the same thing as not owning it. It’s a form of being irresponsible.

Now, some of you may be thinking “Ah, this is tough love.” Not at all. It’s about being transparent. After all, how can you fix a problem if you’re clouding the circumstances that lead to that problem? It’s like trying to diagnose whether you have the flu or not, all the while denying that you have all the flu symptoms!

Confronting our shortcomings is never fun, but like all “muscles” required of success, the ability to tell yourself the truth about what’s working and not working in your life, gets better and stronger with use.  You see, there’s a common myth among the mediocre and it’s this – successful people don’t make mistakes. How funny! The truth is that successful people make even MORE mistakes than non-successful people.

How is this so, you may ask?

It’s because successful people are attempting success more often. They do make mistakes. And unlike the mediocre, the successful don’t waste a bunch of time coming up with clever-sounding excuses for when they screw-up. Rather, they just dust themselves off and get back on the saddle and start riding again. They’re also not afraid to admit that they’re riding somewhere!

It’s perfectly fine to say, “I’m not retired yet, but that’s my goal and I’m dutifully working hard at it every day”. Friends, that statement is way more healthy than the crap excuses listed above.

And when I say “way more healthy”, I mean it.

There’s another very tangible reason why you should not engage in clever excuses to mask the truth – whatever comes across your lips about success, or a lack thereof, generally comes true. This should not surprise anyone. After all, the very first person you have to convince that you can become financially free is you.  And just as you can convince yourself that achieving freedom is possible, so can you convince yourself that it is not.

Argue For Your Limitations And You Get To Keep Them

Tell yourself that you’d only be bored in early retirement, when the truth is that you’d love to retire early, and guess what will happen? You’ll be right. Therefore you won’t ever get the opportunity to retire early.

Tell yourself that you love working at a job you really hate, just to mask a lack of success, and guess what will happen? You’ll be right. You’ll suffer the indignation of having to work at a job in your old age.

Remember, if you argue for your limitations (which is the same as disguising them), guess what will happen – you’ll get to keep those limitations! They’ll be yours. Whether you believe it or not, what you say, what comes across your lips, is typically what you manifest in your life.

Be careful about what you are saying to yourself, because someone is listening (You!) There is a running dialogue inside everyone’s head. We all talk to ourselves our whole lives and many are unaware of it and the affect it can have on them. I´m not going to beat around the bush here; your inner and outer voice has a HUGE impact on just how happy, successful and productive you are.

I´m sure you´ve probably heard that old saying that “it´s okay when you talk to yourself but it´s when you start answering back that you´ve got a problem.”

While that may be a funny quip, it couldn´t be further from the truth!

Listening to your self-talk, asking the right questions and then providing the answers can actually be incredibly valuable when it comes to achieving success.

One of the most valuable lessons in the book “The Richest Man In Babylon” is when the main characters, upset that their childhood friend was wealthy and they were not, asked the most important question one can ask of  themselves….”Why not us?”

The answers to that question opened doors for them. It made them explore areas in their subconscious they had never allowed before.  It made them question their money and success philosophies. It made them change, for the better. It also provided them with relief.

Have you ever said something about success that you know down-deep wasn’t true? Maybe it was something your parents uttered around the house such as “money makes people mean” that got into your subconscious and you just repeated it robotically? How did you feel afterwards? Maybe a little surreal feeling, like a ghost of you was doing the talking, not really you?

Similarly, I have to believe that when people make idiotic statements about retirement like those above, they actually cringe inside. Their conscious knows what they just said is wrong and tries to interrupt. However, they override their conscious with garbage and then are haunted by their statements, just as if they told a major lie. Suspicion haunts the guilty mind.

So, how do you know if you’re telling yourself the truth about your financial situation or not?

Glad you asked. Here’s the multi-million dollar question to ask yourself, to get to the real truth:

When you were young, and had a head full of dreams, what did you imagine your life would be like at the age you are now?

Did you imagine that you’d not want to retire early because of a fear of boredom, or did you see yourself retired, successful and traveling the world care free?

Did you imagine that you’d fall “in love” with a stupid job and spend your days at the end of strings that someone else pulls, or did you see yourself as the master of your own time, doing what you want and when you want, as you spend your time on your life’s purpose?

Did you imagine that you’d slog-away in rush hour traffic for an hour and a half each day, being a paycheck hostage, or did you see yourself lounging on the beach somewhere writing a novel?

What Comes Out Of Your Mouth Typically Comes True

Napolean Hill wrote the classic, “Think and Grow Rich”. In my opinion, an appropriate follow-up book would have been “Tell Yourself The Truth And Become Even Richer”. Look, to think and grow rich, means you have to think rich thoughts. But know this – rich thoughts are the enemy of poor statements.  You literally cancel-out any rich thoughts with statements to the contrary. This is because our minds can’t hold two contradictory, competing, thoughts. You are either for early retirement or you are for its opposite. What comes out of our mouth is what will manifest in your life.

In summary, here’s a question bridge – what is the staple of a good friendship?  It’s this – friends don’t deceive each other. You are your best friend, so telling yourself “white lies” to cover up something is a form of betrayal to you. Tell yourself the truth about your finances. It’s OK if you’re not where you want to be in life yet. If that’s the case, rather than utter some nonsense that belies you, just say “I’m working on becoming financially free. I plan to retire early. My thoughts, habits and actions will take me there.“ And indeed they will. 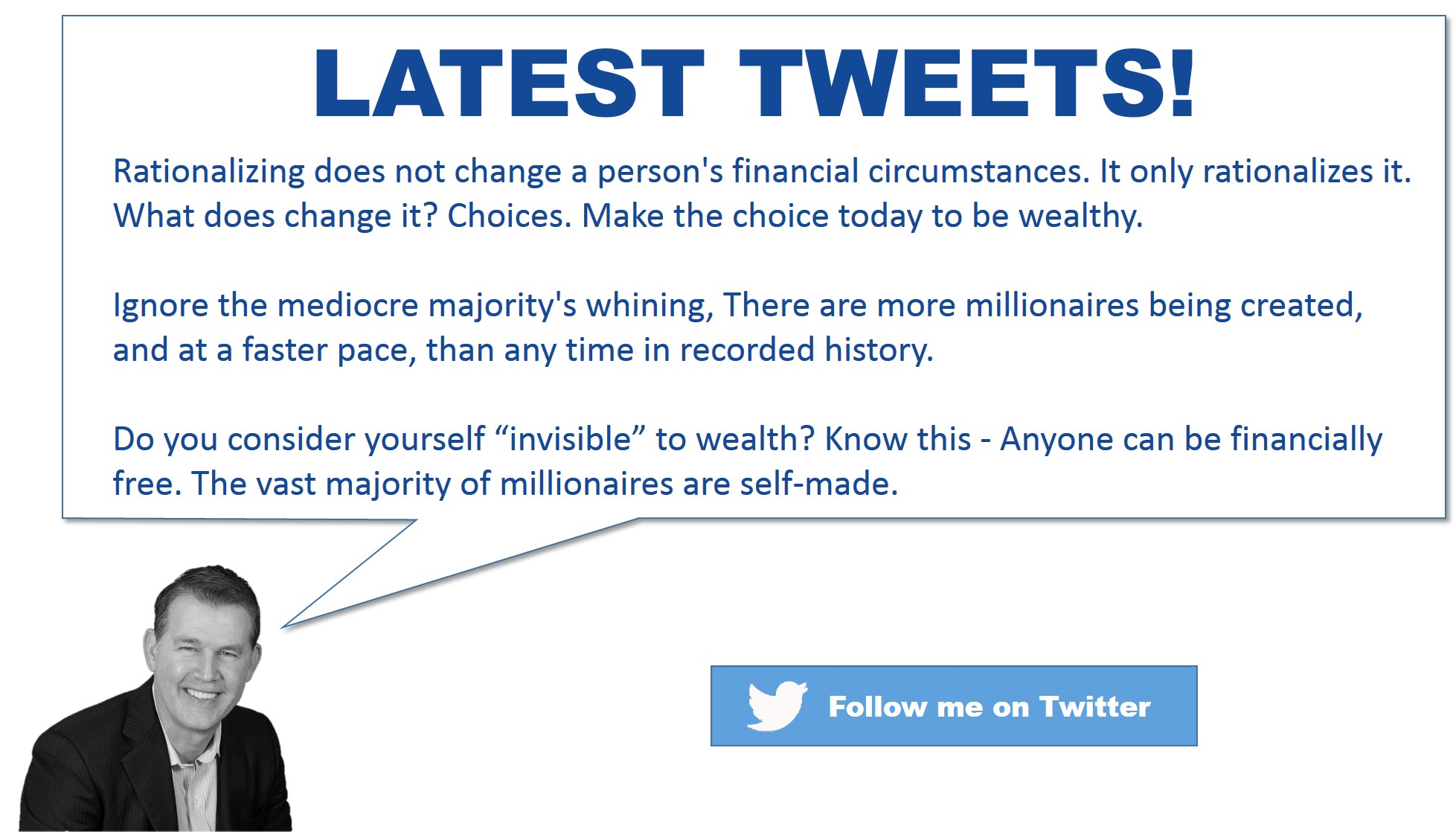 The Goose Killers: Those Who Fail To See The Difference Between Getting Rich And Staying Rich

New Video! Why Most People Don’t Achieve The Important Things They Want For Themselves