Are your children making your poor?

Boy, talk about a sensitive topic.

Invariably when I’m asked for money advice, the conservation turns to how much money is being spent on the advice seeker’s kids. And how quickly the defensive walls come up!

Those seeking my advice can be open to a lot of suggestions I give them about how to better themselves financially, but when it comes to children…no way!

Most people don’t want to have that conversation. “Kids bring so much joy into your life!” “Kids are their own reward!” So go the clichés.

Sure, kids are joys, but let’s be honest – they can be expensive. Raising a child can cost up to $250,000 – and that’s from a study done years ago. That’s only the cost through high school – college is another problem entirely, unless you don’t plan on paying for your child’s education. And a large family? Well, that may cost you a small fortune.

But this doesn’t mean you can’t become rich with a family. Far from it. In fact, I see way too many people using their family as an EXCUSE as to why they’re not rich. That’s a disgrace.

So, what’s a freedom fighter with kiddos to do?

The first step is to resist trying to outdo other parents with what you spend on your children. Yep, I said it. I see an almost sickness in many parents nowadays  – they compete with each other using their children.

The same people that tell me that money can’t buy happiness slavishly try to buy their kid’s happiness.

It’s almost as if these parents are trying to outspend each other with things and experiences showered on their children. It’s become the new way to keep up with the Joneses. In today’s bizarre parenting culture, you’re somehow not a good parent if you don’t go broke buying your kid a $3,000 laptop and sending them to prep school.

It’s as if kids aren’t supposed to experience any inconvenience now. In fact, recent studies have shown that each new teen generation is actually driving less. Why? Why bother, because mom and dad (or someone) will take them where they want to go, so goes their thinking. That’s right. The very event that defined individual independence (getting your driver’s license and driving) for decades, is now too much responsibility.

I struggle to remind myself that my childhood was spent playing in the forests behind my house, not at expensive soccer lessons. My parents would have done me a disservice by buying me a laptop or whatever the equivalent was back then.  Learning how to live with less – at least as far as toys and things – is a gift, not a burden, my friends.

The First Generation comes from a life of hardship and is determined to make a better future for themselves. They are willing to work hard and make sacrifices in order to achieve their goal. By their later years, their efforts have paid off and they enjoy a more comfortable life, often with assets to pass on.

Their children, the Second Generation, grow up a witness to their parent’s struggle and understand the importance of hard work. Although they now live a more comfortable lifestyle, they may still remember a childhood filled with frugality. Because of this awareness, they make financial and educational choices that help them build upon the foundation their parents worked so hard to create. By their later years, the second generation has acquired even greater wealth.

The Third Generation, however, has no memory of want or struggle. They only know a life of plenty and often lack an understanding and appreciation for the work that went into building the lifestyle they now enjoy. Without this awareness, it is of little surprise that the third generation has a tendency to squander the assets their parents and grandparents worked so hard to achieve.

Around the world there are many variations on this theme, all used to describe the same thing – teach your children that they’ll have to work for what they want, the philosophy of merit and overcoming adversity and the value of a dollar saved, and they’ll go on to make you proud. Alternatively, teach them to never lack for a single thing, to never experience inconvenience and that money comes only from your wallet, and you’ll create an adult delinquent. Proverbs 13:24, “He who spares the rod hates his son, but he who loves him is careful to discipline him.” Amen.

I think that children cost as much as you’re willing to spend on them; people perhaps spend more than they have to/should simply because they want to do the best for their kids, and they’ve been brainwashed into thinking that means more material goods and an expensive education.

The Real Thief Of Wealth

Spend what you can to give your child a good life, but don’t overspend. And certainly don’t go broke, or anywhere close to it, raising your children. Friends, children are not the thief of wealth. What is? What has always been, spending more than you have.

After all, what do children need the most from you? A fancy phone? A wardrobe that would make Paris Hilton envious? A new sports car when they turn 15?

Hell no. That’s just what the mediocre majority will brainwash you into believing.

What children need most from you is love and to be raised in a loving environment. That costs nothing.

My friends, lack of money is the number one cause of problems in a marriage and family. Going broke buying crap for your kids is sure way to invite anxiety, stress and chaos into your family life. That’s hardly the environment conducive to love.

Speaking of love, be kind to yourself as a parent. Do the best you can and resist the siren call to spend all you make on your kids. Ignore what the mediocre majority does. They’re just experts in being miserable.

After all, isn’t that what you want for your kids?

P.S.S. Looking to make an overnight fortune? Don’t sign-up to receive my newsletter  below. There’s no magic secret. Becoming financially free takes time and dedication. But learning professional-grade money skills can have a life changing effect. If you’re ready to put in the work and learn, I can show you how to achieve financial freedom. Sign up for my free newsletter below. There’s nothing for sale on this blog or in the newsletter.  I just provide actionable advice for free as my way to give back. What do you have to lose? Subscribe today. 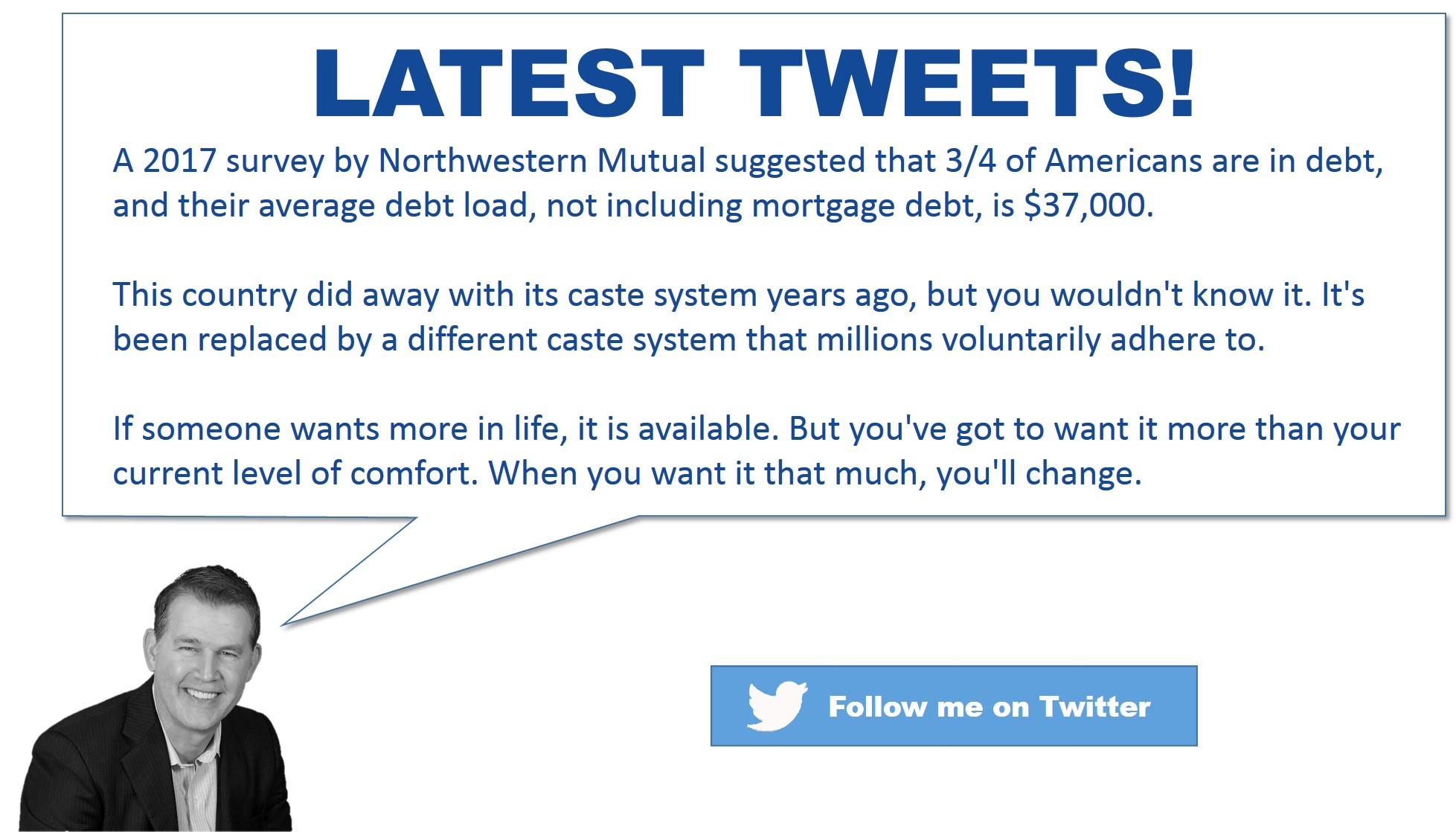 The Duality Of Man: Why People Do The Opposite Of What They Should Do With Their Money